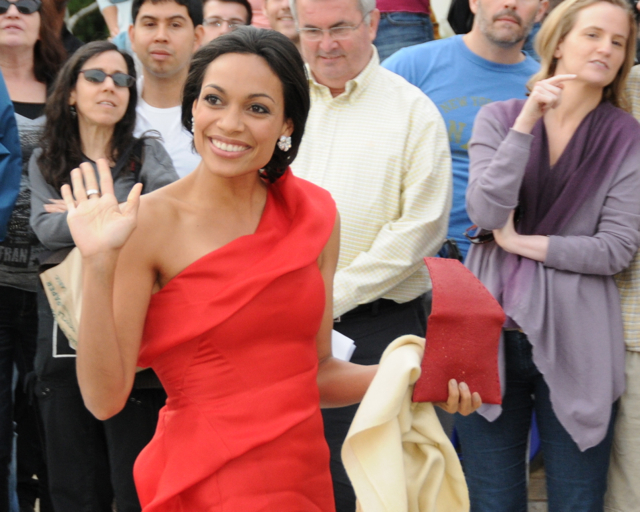 If you’re a fashion photographer, an aspiring paparazzo, or just think you’ll get bored taking pictures of the architectural and historical wonders of Washington, DC, consider scheduling your trip for the weekend of the White House Correspondents’ Dinner (WHCD).  Often referred to as the Nerd Prom, the WHCD honors those media types who primarily work in and around the White House.  Celebrities, reporters and commentators (the talking heads you see on network and cable news), and politicians come together for a night of dinner, awards, and the comedy stylings of the President.  I’ve had mixed luck photographing this event.  I went to the 2011 WHCD and got some great pictures. I went again in 2012, it was pouring rain, the security was tighter, and I got no usable photos. So the event is difficult to prepare for.  Below, I’ll give you the best case scenario (what happened in 2011), but be prepared to get shut out (like I did in 2012).

The WHCD takes place at the Washington, DC Hilton at the end of April each year.  On that day, I suggest you get there early.  I arrived at 2:30 p.m. because I didn’t know what to expect and wanted to get a great spot.  If you’re not as obsessive about time as I am, you could easily get there at 4:30 and get a decent spot.  Guests started to arrive around 5:30 for the red carpet walk and pre-comedy show dinner (the part we’re all used to seeing doesn’t start until around 9:00).

Understand that once you get there, the situation will be somewhat fluid.   As best I could tell from the research I’d done beforehand on previous years’ events and my experience this year, the drop-off/pick-up situation for the celebrities varies.  The red carpet takes place inside the South entrance (where [E1] is marked on the picture above) and I expected that celebrities would be dropped off there.  A rope line was set up outside (1), so I patiently waited and chatted with local press and paparazzi folks that were queued up to get inside; they all had passes.  I stayed at the rope line for another hour or so before the celebrities started to arrive.  Contrary to my expectations they weren’t dropped off at the South entrance [E1], but instead walked down the street from Connecticut [1] and Florida [3] Avenues.  At about 6:15, the stream of people entering the party started to dry up but I could still see fancily dressed people walking along Connecticut Ave. heading toward the West entrance [E2], so I moved to the driveway along Connecticut Ave. (2).

By this time there were several hundred people gathered, doing their best to celebrity watch.  There were teeny-boppers, protesters, and random passersby that wanted to see what all the fuss was about and got a real treat.  The security was doing their best to hold people back but it was simply not possible.  Those entering the party had to walk directly through a sea of humanity (including myself).  Many were still coming from the South on Connecticut Ave. [1] but now many were being dropped off by limos, (private) busses, and taxies at [2].  Wading through the crowd presented an obstacle for some, like Colin Powell, who was pursued by yelling protesters, but most were adoringly screamed at by young girls or blinded by the popping of flashes from people like me.  Some were about 40 feet away from me and some I had to step out of the way of so they could get past.  The latest arrivals showed up around 7:45 and I left around 8:00 with about 400 pictures to sort through.

Zoom In:  I got some fairly close shots (35-50mm) but having the additional reach of a telephoto lens (up to 200mm) was nice because, in the midst of a crowd, its ideal to take tight close-ups and cut out some of the people in the background (I had to additionally crop some of my pictures).

Use Aperture Priority:  Taking pictures of celebrities in this situation is sort of like photographing wildlife.  You have to react quickly when you see one and you are sweeping your camera across a range of lighting conditions.  So, if you’re not an expert at working in manual, you will need to use some automatic settings.  I recommend using aperture priority mode and leaving the aperture wide open.  This will be helpful for two reasons.  First, like having a telephoto lens, setting the aperture to f/2.8 and blurring the background will remove some of the distractions from your picture.  Secondly, the sun sets pretty early in April and toward the end of the arrivals it gets fairly dark.  If you are not a fan of bumping up your ISO (and I am not) then you can end up with some blurry pictures.

Capture in RAW:  If you have the room on your card, I recommend taking your pictures in RAW format.  I had some pictures that were “off” in various ways; color, exposure, etc. and I think they could have been saved if I had used RAW format instead of high quality JPEGs.

Be Prepared to Celebrity Spot:  People entering the party are immediately identifiable because the men are in tuxes and the women are in elegant dresses, but before you go you should figure out who’s been invited to the dinner (I offer some resources below) and look at some recent pictures of them.  It seems like recognizing a celebrity would be an easy task, but if you’re not used to seeing these people outside of the context of TV, movies,  or music videos they are pretty hard to spot.  I ended up taking a lot of pictures of attractive people in tuxedos and gowns and going through the pictures later.  You can save some room on your memory card by being prepared and reducing the number of  false positives.

Lens: I recommend using a fast, telephoto lens that has a wide zoom range.  I use a Nikon D300 and, the night I attended the WHCD, I was using a Nikkor 18-200mm VR kit lens.  I originally wanted to bring a 70-300mm lens because I thought I was going to be, at a minimum, 50-100 feet away but I’m very glad that I didn’t bring it.  It simply wasn’t necessary.  Most of the action took place at less than 50 feet away.  If I had the 70-300mm lens I would have been struggling to frame some of the close-up shots.  Using multiple lenses is not an option either.  Things happen too fast and there is no good place to swap lenses.  One lens that can do it all is preferable.

If you don’t have a DSLR you can make due with a point-and-shoot or a decent cell phone camera.  The beauty of pictures like these is mainly the bragging rights of saying you’ve seen some of the people.  Plus, you can get close enough to take some decent pictures, even with a small point-and-shoot.

Tripod: I recommend leaving tripod or monopod at home.  There is no explicit rule saying you can’t have one (as there is in some areas of DC) but there were times when the sidewalk got packed.  People shifted around frequently and tended to lose their mind when a new celebrity showed up.  They would have no qualms about walking straight back into you and your equipment if it meant they could get the picture they were looking for.  The light is decent, at least for the first part of the night, and you shouldn’t have to zoom much, so a tripod is just a hindrance

Flash: The value of an external flash is questionable.  I used an SB-600 flash with a diffuser mounted on my camera’s hot shoe connector. For the first hour of shooting the sun was out, casting harsh shadows, so I wanted to be sure I had good fill lighting.  During the last hour or so, the light got fairly dim and I was close enough for the flash to have a real effect.  I can’t say if it was really necessary but I think it’s worth bringing along.  As a side note, I think it was the addition of the flash that got me the most glares from celebrities who thought I was out to sell my pics.

White House Correspondents’ Association –  The official site for the group that hosts the dinner.  Leading up to the event, you can find some useful information here.

Washington Post – Articles will start to appear in the Lifestyle and Gossip sections of the paper about two months before the event.

#WHCD and #nerdprom hastags on Twitter – I found out a lot of great information from monitoring the traffic on these hastags.  I also got a lot of hits on my WHCD Flickr gallery when I posted using them.

Me –  If you have any questions, enter them in the comments below or use the CONTACT FORM. I will answer them to the best of my ability.

Notes:          Brush up on your celebrity identification skills