NEWSFLASH:
brandonkopp.com > Blog > Special Feature > The Old Post Office as a Replacement for the Washington Monument 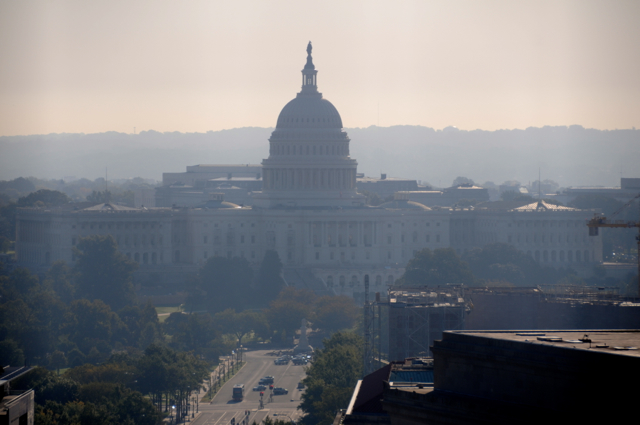 The Washington Monument is closed indefinitely due to damage from an earthquake that occurred in August 2011. Chances are that repairs are going to take months and during that time the Monument will remain closed.  So what are the 55,000 visitors per month that would normally visit the observation deck of the Washington Monument supposed to do to get pictures looking down on Washington, DC?  The natural alternative to the Monument is the Old Post Office Tower.  I recently checked it out so I could give you enough information to determine whether it’s worth your time.  Here’s what I found out: 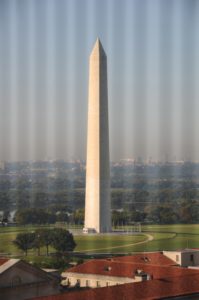 Photographically, I was very disappointed with the Old Post Office Tower.  Much like the Washington Monument, the Tower is square and the sides face the cardinal directions.  On three of the four sides of the Tower, however, the viewing portals are strung with closely packed, vertical wires rather than windows.  This makes photography incredibly difficult.  You can’t slide your camera lens in between the wires, as you can with the bars at places like the White House.  Your only option is to take your pictures through the wires.  You can get relatively little interference from the wires if you back away from them, zoom in (at least past 100mm), and focus on the distant object. This will cause the wires to blur out of focus.  If you aren’t zoomed in far enough you will see vertical banding in your pictures as in the picture to the right.  By the way, this trick is also great for taking pictures as zoos. 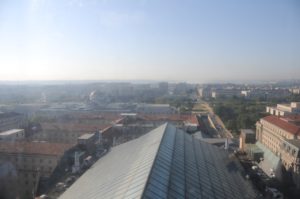 The one side that does have windows faces South toward the National Mall, the Natural History Museum, and the Smithsonian Castle.  The windows are made out of plexiglass and were incredibly dirty when I went (and I was the FIRST person up in the Tower the morning I went).  The windows are also heavily scratched making (good) photography through them difficult. 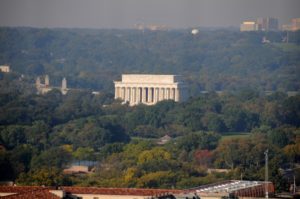 The view from the Tower isn’t bad.  At 270 feet you are still very high and can see a great distance.  Some notable things you can see are the Washington Monument, Lincoln Memorial, Freedom Plaza, the J. Edgar Hoover FBI building, the Capitol, the Reagan Building, and others.  Notably absent from the view is the White House which was obscured by trees.  The view would probably be better during the Winter.

While the Old Post Office Tower is not a suitable replacement for the Washington Monument it does offer one great feature that the Washington Monument does not.  It’s relatively unknown.  I arrived 5 minutes after it opened (the Tower is open for visitors at 9 Mon-Sat and 10 on Sun) and I was the first person up.  There was no line, no ticket necessary, and very few people obstructing the small walkways.  This allows you to be more flexible with your trip.  If its lunchtime and you decide you want to visit the Tower you can go. You don’t have to worry about whether tickets are still available.

So, for the time being, the Old Post Office is what’s available if you want to take elevated pictures of downtown DC but don’t go buying a frame for those pictures just yet.