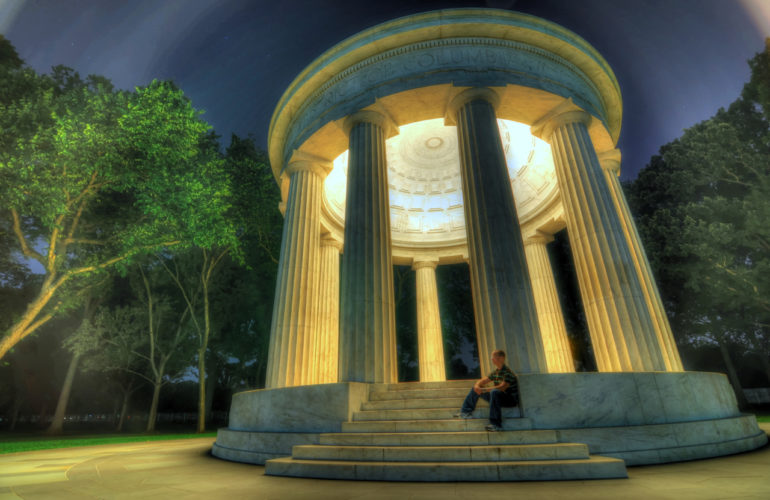 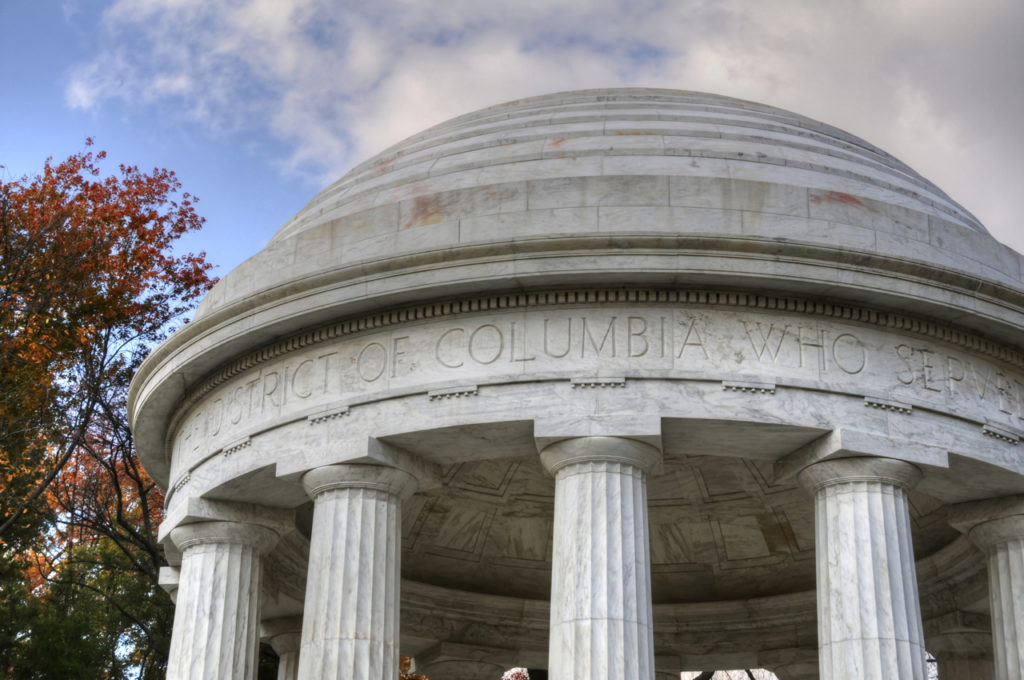 I’ve written seven location-based posts for this blog, and have concentrated on the must-see attractions of Washington, DC; the Capitol, the White House, and the memorials along the National Mall.  After all, those are probably the reason you’re coming to DC in the first place.  I figured it was about time I shared a “hidden gem” with you; a beautiful location that’s not necessarily out of the way, but something that you might overlook as you hurriedly collect up your camera gear and scramble between locations.

I walked by The District of Columbia World War I Memorial dozens of times before I finally stopped.  It wasn’t until I saw news reports about it in late 2011, that I even recognized its existence.  You’ll notice I refer to it as the DC WWI Memorial.  That’s because it is, in fact, dedicated the citizens of the District who died during the Great War; there is no national WWI Memorial. And that was the reason for all of the news stories.  The Memorial underwent restoration in 2010-2011 and had been closed off.  As it reopened, Congress must have noticed some of the stories too and floated the idea of dedicating it as a national memorial.  DC citizens, already wary of the federal government imposing its will on the District, made an uproar about it and the idea was shelved as Congress moved onto debt limit and budget battles.

That’s a roundabout way of telling you that this Memorial, in addition to being picturesque, has an interesting story behind it that you can tell through your photos.

The beauty of the DC WWI Memorial, and of hidden gems in general, is that they’re hidden.  Crowds are not a concern.  In fact, over the several times I’ve visited this Memorial, I have only seen small groups of 2-7 people there, and when they leave there is usually a gap before the next group wonders what this marble gazebo is all about.  I’ve watched people walk by it, see  me with my tripod and camera setting up photos, and then double back thinking that it must be worth checking out if someone is photographing it. 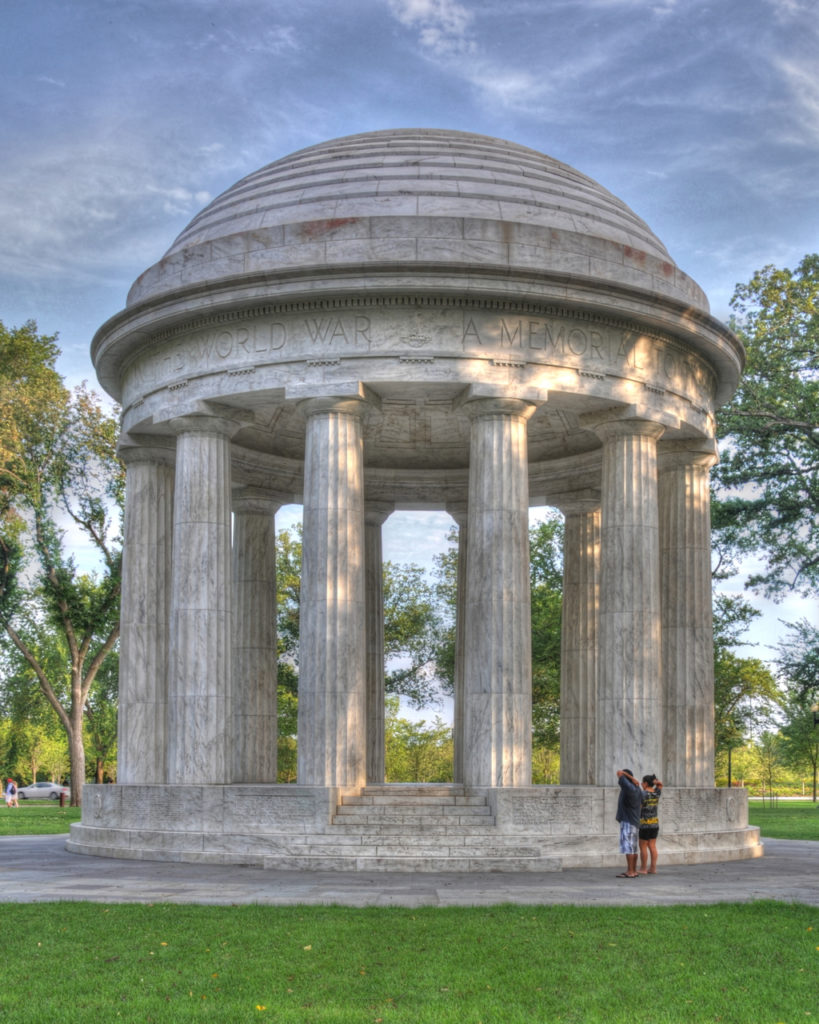 The Memorial is surrounded on 3 sides (North, East, and West) by trees, so it doesn’t get direct sunrise and sunset light, but the white marble does still pick up some color during the golden hours.  The white marble can also be a drawback when trying to take photos of the Memorial in direct, intense lighting.  I’ve had some success with night photos as well.  There are no exterior lights but there are bright lights on the interior of the dome which makes dynamic range an issue.  I take a lot of HDR photos and they are especially helpful in these situations.  HDR is also especially helpful in bringing out the detail (i.e., marbling) in the Memorial.

Since you don’t have to worry about crowds and lighting conditions, you should fit the WWI Memorial into your schedule after you have planned out your other stops.  The Memorial is located amongst the Lincoln, Martin Luther King, WWII, and Korean War Memorials.  Once you’ve set your itinerary for sunrise, sunset, etc. at these other locations, work the WWI Memorial somewhere in between.

Including trees in your photos of the Memorial is unavoidable, so months where there are leaves on the trees (late March – mid-November) are your best bet for quality photos.  The National Mall is a great place to see Fall color and the WWI Memorial should definitely be one of your stops.

Given its small size and tight location, there are limited angles from which to photograph the Memorial.  What you see in the map below is what you get.  The Google Earth imagery was a bit out of date and showed a lot more trees than are currently there.  I covered them up with the green squares as best I could. 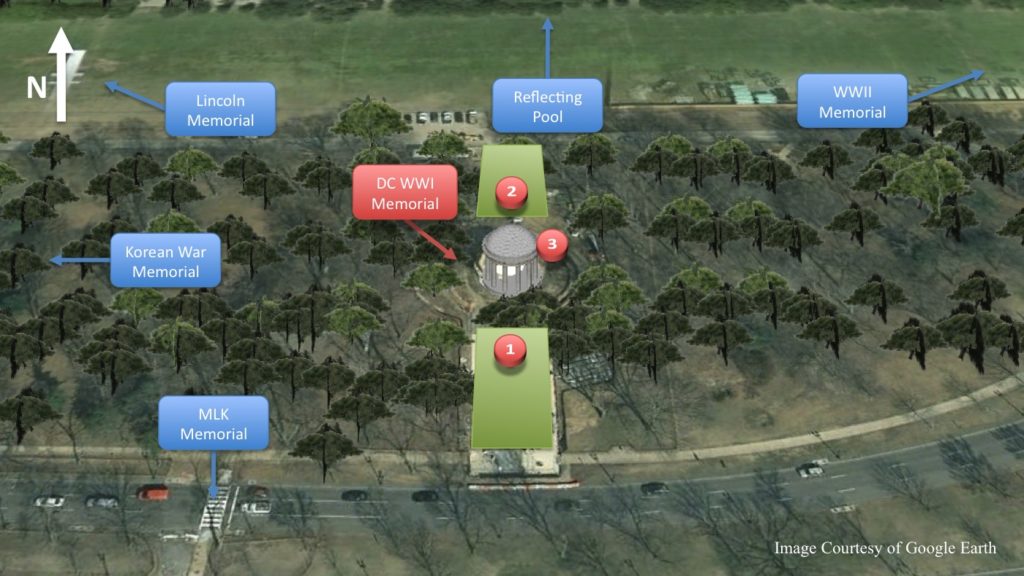 You have access to the full 360 degress of the exterior.  The problem is that on the East and West sides, the trees will prevent you from backing up far enough to use some focal lengths.  On the sides you will need much wider angles.  The North (1) and South (2) sides are the most interesting anyways.  On these sides there are stairs that provide points of visual interest and make the Memorial more inviting.  If you are on the North side, facing South, you may get vehicles Driving along Independence Ave. in your pictures.  For me, tour busses detract from what I’m trying to capture so I wait for breaks in the traffic.

Also on the exterior, just beneath the dome, there is an inscription dedicating the Memorial to the citizens of the District of Columbia (as in the photo at the top of this post; seen from point (1) on the map) who died The World War (as in the photo below and on the left; seen from point (3) on the map)  Since these are the words that tell the story of the Memorial, I try to include one or the other of these phrases in my photos of the exterior. These phrases are on opposite sides of the Memorial so you can’t include both.

Finally, the Memorial is a great place to take portraits or do some self-photography.  I, sometimes, get self-conscious if I set up my tripod to get photos of myself, but since there are so few people around this Memorial, it is a great place for that.  Columns are the signature design element of Washington, DC.  The beautiful columns on the WWI Memorial give you a chance to take your time, line up some photos, and get some pictures of yourself (or friends and family) that are quintessentially DC.  It’s also nice to add a human element to your photos of the Memorial to give it a sense of scale. 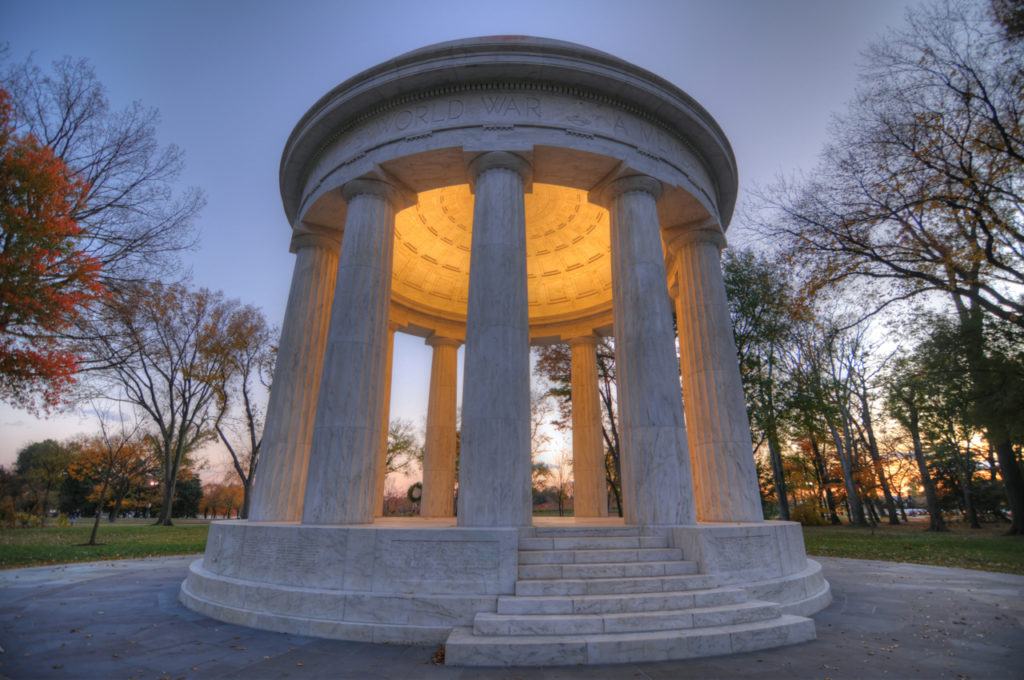 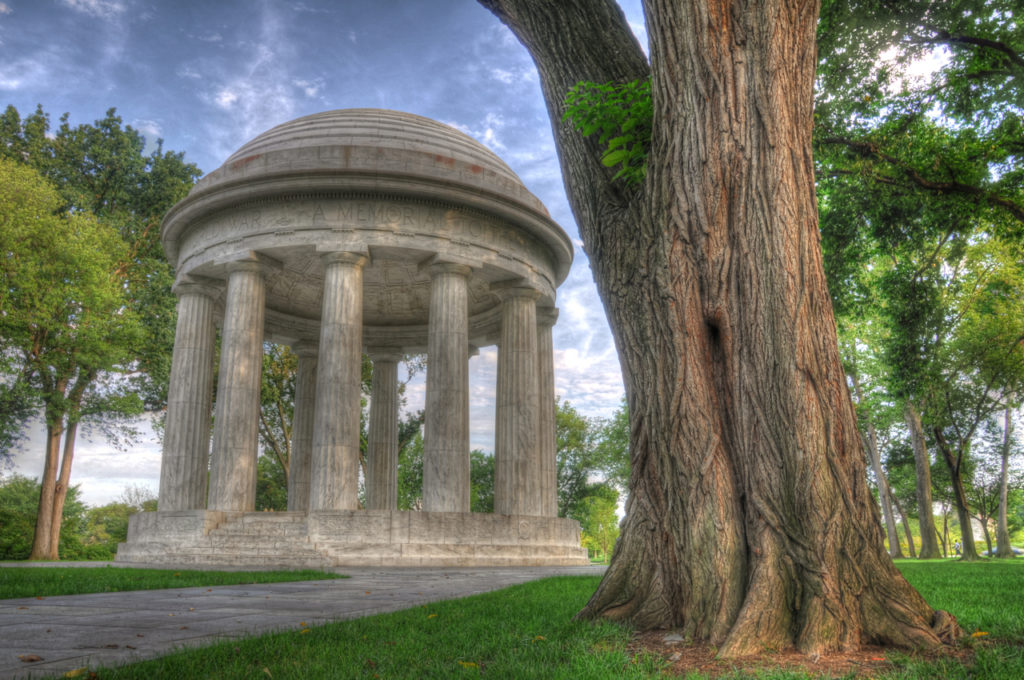 Some of the best photos in DC can be found by looking up.  If colums are the signature design element in DC architecture, the dome is a close runner-up.  The interior of a dome always makes for a nice photo, if you can handle the often difficult lighting conditions.  The WWI Memorial is no different.  The difficult part here is that the Memorial is not particularly tall and getting the whole dome in a single photo is a challenge.  Both of the photos below were taken with a wide-angle lens at 11 mm.  If you don’t have a lens with a focal length that wide, you can also do some panoramic stitching. 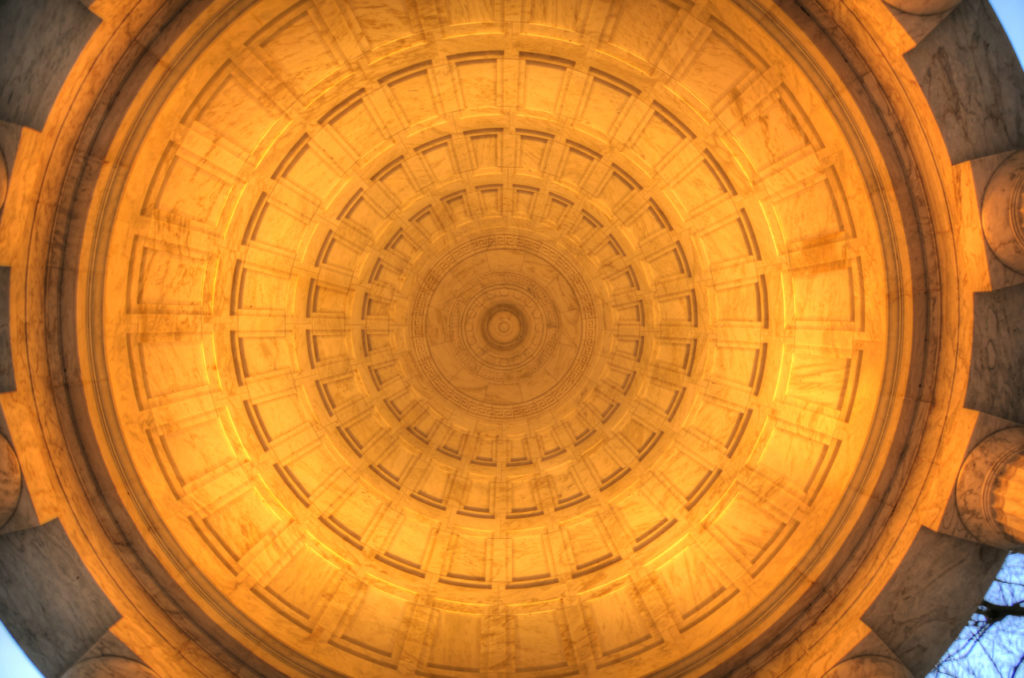 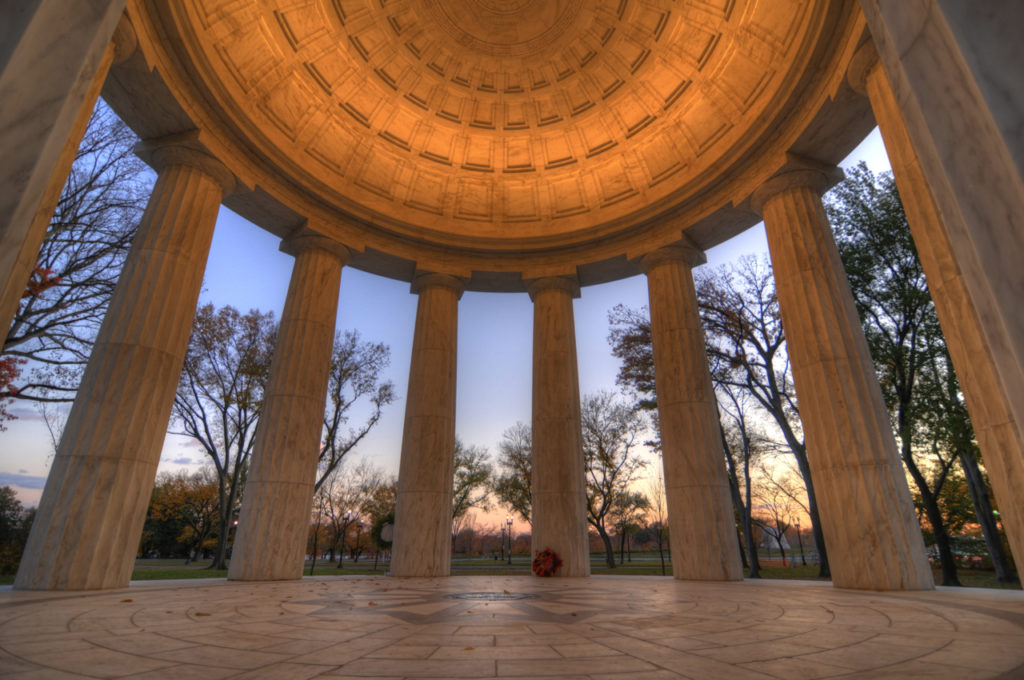 Lens: A standard zoom lens (DX: 18-135mm, FX: 27-200mm) is sufficient for capturing most photos around the DC WWI Memorial, however some of my favorite photos have been taken with a wide-angle lens (< 18mm; < 27mm). If you have them, I’d recommend you bring both to make the most of the time you’re here.

Tripod: Bring a tripod.  The Memorial is a great place for night and HDR photos.  For these types of photography, I recommend using a tripod.  There are no restrictions on tripods, but if you want to set your tripod on the marble, please be sure it has rubber feet (not metal spikes) and that you don’t slide it from one position to another.

Flash:  You might find it helpful to bring an external flash. As I said earlier, the Memorial is a great, out-of-the-way place for taking portraits.  A hot-shoe flash can help with fill lighting if you are taking pictures of friends or family.  The Memorial is also small enough that a strong flash can help illuminate the exterior to balance the exposure with the interior lights.

Filters: You may find a circular polarizing filter helpful, especially during the day. With the trees you won’t get much sky in your photo, but there will be a lot of green in the grass and other landscaping that can be made richer using the filter.

Bag: There are no bag restrictions for the National Mall.  Given what I’ve recommended as far as equipment to bring, you may want to use a medium or large bag.

What:          The District of Columbia World War I Memorial

Where:        Along Independence Blvd. between the WWII and Korean War Memorials

0 thoughts on “Photographing the DC World War I Memorial”