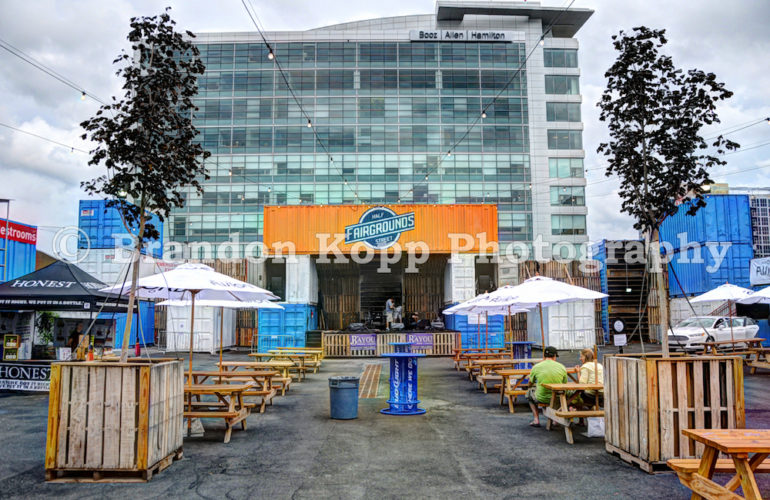 A ship is safe in harbor, but that’s not what ships are for.

When I display a photo publically (on Flickr, Google+, Smugmug, or display physical prints), my hope is that the viewer will experience some of the wonder and amazement I had while viewing the scene first-hand.  I also want the viewer to have their own, subjective (hopefully positive) reaction to it.  I’d imagine most photographers, and artists in general, have the same goals.  That’s why I don’t understand the pervasiveness of watermarks.

It’s not that I don’t understand photographers’ motivation for using watermarks; I do. I’ve had my photos used without my permission plenty of times.  For each misuse I’ve found out about, there are probably 100 more that I will never know about.  Like ranchers that fear cattle rustlers, photographers want to brand their photos with idiosyncratic markings.  They want to mark their photos in the hope that, if stolen, those who find them can be guided home to thier website.  They want to scar their photos in the hope that, if the watermark is intrusive enough, that the photo rustlers on the Internets won’t want to take them at all.

You can keep your photos safe by making them unappealing, but that’s not what photographs are for.

My main beef with watermarking is that it takes the viewer out of the moment.  It’s like placing another, far less interesting, photo on top of the one you’re trying to get people to look at. Is there an effect on the viewer’s experience? That likely depends on how obnoxious the watermark is, but my philosophy has been that it will always have some, negative, impact.  So then, is the cost of diminishing the viewer experience worth the benefit of branding and limiting misuse?  In my opinion, no it is not.

I also dislike watermarks because, to me, they come across as boastful and untrusting; two things that don’t sit well with my North Dakota upbringing.  Boastful because the watermark says “This photo is so good, I just know you want to steal it,” and untrusting because the photographer assumes people are out to misuse their photo.  Occasionally, watermarks even strike me as…delusional when I see them on terrible photos.

Finally, from a photo management standpoint, I don’t use watermarks because I don’t like the idea of maintaining two versions of my photos (watermarked and unmarked).

The (Mis)use of Watermarks

This whole conversation has been abstract, so let me give some examples of what I’m talking about when I say obnoxious, bad, or distracting watermarks.  This isn’t to say that all watermarks are bad; as with any tool there are better and worse ways apply them.  I don’t consider myself an arbiter of what is and is not “proper” in an objective sense.  I speak only for my own preferences, which I outline below.

In my examples, I didn’t want to take people’s photos because (a) I’m not trying to call out specific people for watermark abuse and (b) that would be photo misuse and probably only encourage their watermarking.  So below, I’ve taken a few of my photos and overlayed them with watermarks that I think cover the range from terrible to not-so-good.

These types of watermarks are common on stock websites.  I only see them occasionally on photo sharing websites, and those are mainly from freelance photojournalists trying to sell their photos of current events.  The watermark screams…I know you want this, but you can’t have it.  I intentionally chose a bad picture to illustrate how silly a watermark looks on a less-than-desirable photo.  Who would want to steal this?

The studio/artist name in a corner is probably the most common watermark.  The marks vary in size, but I think the one below is about standard.  Some are colorful, some aren’t. Some incorporate images, some are just text.  I’ve even seen ones that are indecipherable symbols (much like the cattle brands I talked about earlier). What they have in common is that they all demand attention.  As a side note, they also all assume a high search engine optimization (SEO) ranking. Hopefully your name falls in the first couple entries of search results.  If your name is John Smith or your studio name is Beyonce Bieber Studios, good luck getting anyone to find you.

Inclusion of a URL in a watermark is fairly common too. This helps circumvent the SEO problem mentioned earlier.  This watermark is a bit smaller too; a bit less distracting.  The problem here though, is the same as the artist name watermark above.  It is easily cropped out.  In this case, the photo would look fine if it were cropped a little tighter.  So what happens then?  It needs to be bigger? Placed closer to the center? Covering up a key element of the photo?

I didn’t know this was a thing until I saw a blog post from Klaus Hermann.  He embeds his watermark so cleverly that you have to actively search to find it.  It’s a fun, unique signature he puts on his photos and I’m sure he appreciates the challenge of trying to hide it and blend it in well enough that it’s not obvious.

I think it’s a cool trick and it certainly doesn’t pop out at the viewer.  After it’s found, however, it is difficult to not see.  I didn’t do a great job of hiding my watermark in the photo below.  Do you see it?  In the ceiling.  It’s kind of hard to not look at it now, right?

Finally, the frame watermark.  I don’t see this very often and I have mixed feelings about it.  It is still distracting, but at least it’s not covering up the photo.  But therein lies it’s weakness.  The photo can be cropped out of the original.  So the border only serves to distract those honest folks trying to enjoy others’ photos.

How I Handle Photo Identification

Watermarks can provide useful information about the photographer if the viewer is interested in finding more of their work, and it can be used if there is some dispute over who the photo belongs to.  This can be especially important if the photo is emailed, pinned to multiple Pinterest boards, or somehow becomes dissociated from the photographer’s website.  But this can be done without distracting from your photo.

Rather than placing a watermark on the photo itself, which can detract from the experience, I add my name and website information to my photo’s metadata, or EXIF info.  This isn’t an ideal solution either.  A person who is truly interested in finding my work has to know to look in the metadata and has to be somewhat tech savvy to find it. This data can also be removed as easily as it’s entered, but the same is true for some watermarks that can be cropped or cloned out.

I didn’t always do this, mainly because the process of adding information to the metadata isn’t straightforward.  It wasn’t until I discovered my camera had a function to do this automatically that I began doing it.  In the Nikon D300 (and I’m sure in almost all digital cameras), there is a menu option for Artist and Copyright Information. That option allows you to enter 36 characters worth of information about yourself.  This can also be done in photo organization software such as Lightroom. 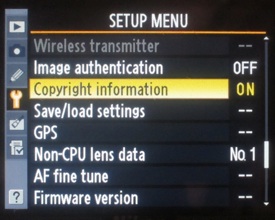 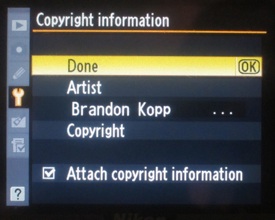 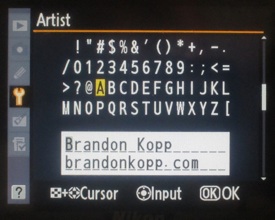 This copyright information is then associated with the photo along with all the information about aperture, shutter speed, ISO, etc. and can be found in EXIF info on photo websites. 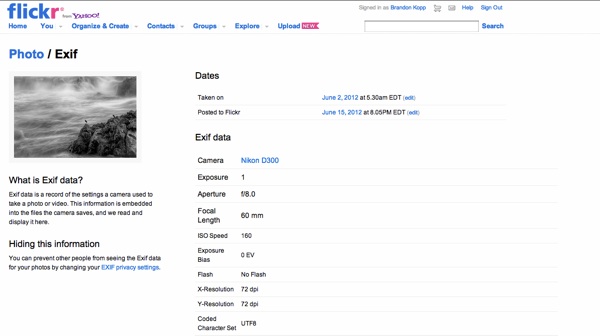 Unless you hide your photos on a hard drive under your mattress, you are opening them up to potential misuse.  You can use all the tools at your disposal to prevent this misuse but ultimately those tools only keep the honest people from experiencing that sense of wonder you had while taking the photo.

Some Additional Opinions on Watermarks