I am embarrassed to say that I “used” a polarizing filter for years without the first clue how to actually use it. In my early days of photography, I bought some books on general photography principles. In those books, I read about polarizing filters and how they cut down on reflections and make green plants look greener and blue skies look bluer. As an aspiring landscape photographer, this sounded very appealing to me, so when I bought my first camera that accepts filters (a Sony Cybershot DSC-F828) I made sure to order a circular polarizer. From that moment on, whenever I saw a scene that included green or blue, I slapped it on and started snapping photos.

Fast forward several years and I’m reading an Outdoor Photographer article about photographing Fall colors. In that article, the author describes how you have to rotate the filter to the right orientation in order for it to block light coming from certain angles. Somehow, I missed that in my earlier reading. My own, internal sense of embarrassment hit me square in the face. Nobody else knew that I’d just been throwing the filter on my camera any which way and assuming it was working, but I knew and that was bad enough. 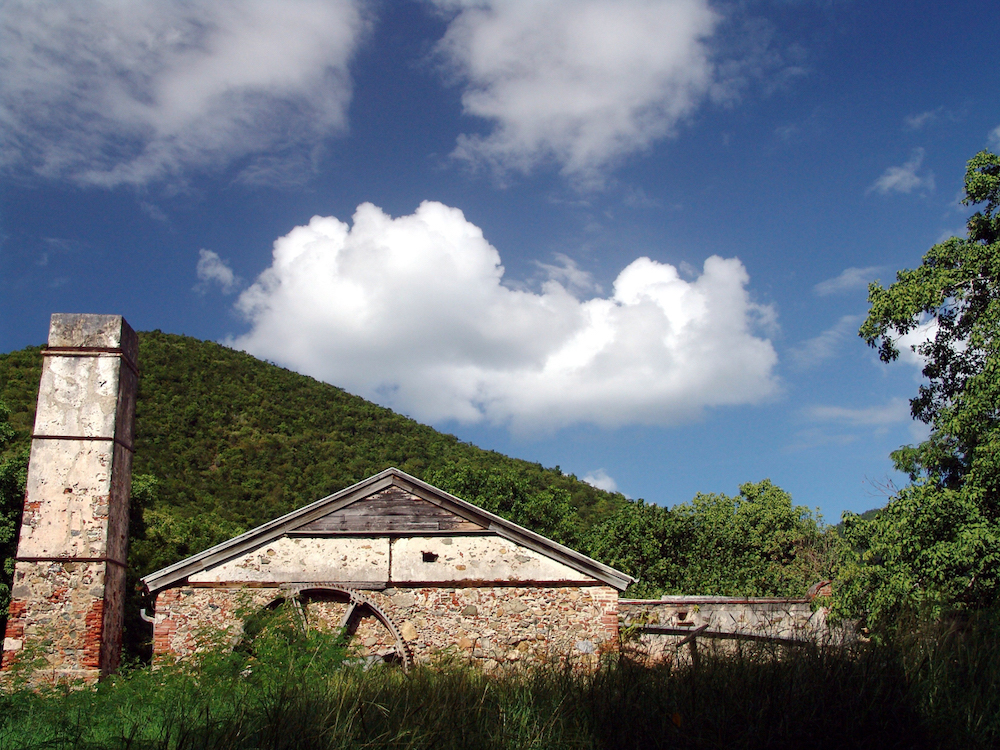 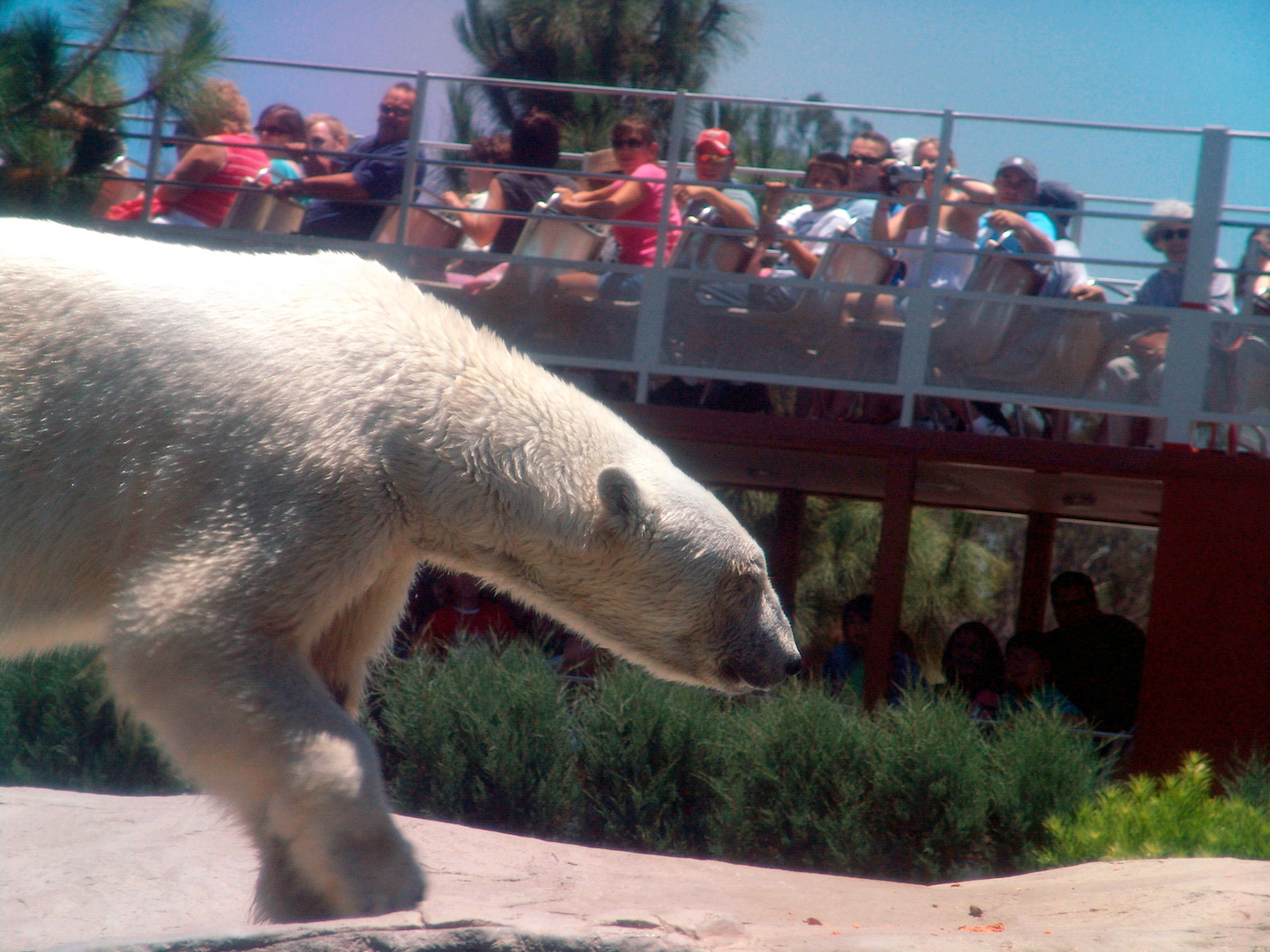 I read more about how polarizing filters work. I found a basic understanding of the principle helpful in using the filter, so let me try to pass along what I learned in as simple and visual a way as possible. What I’m about to write probably wouldn’t get me an “A” in physics class, but it gets (hopefully the correct) point across.

How A Polarizing Filter Works

NOTE: In all of the diagrams, I use colored lines to denote the difference between Y-polarized light waves and the ones that are X-polarized. The colors of the lines are not meant to denote the color (i.e., the wavelength) of the light. 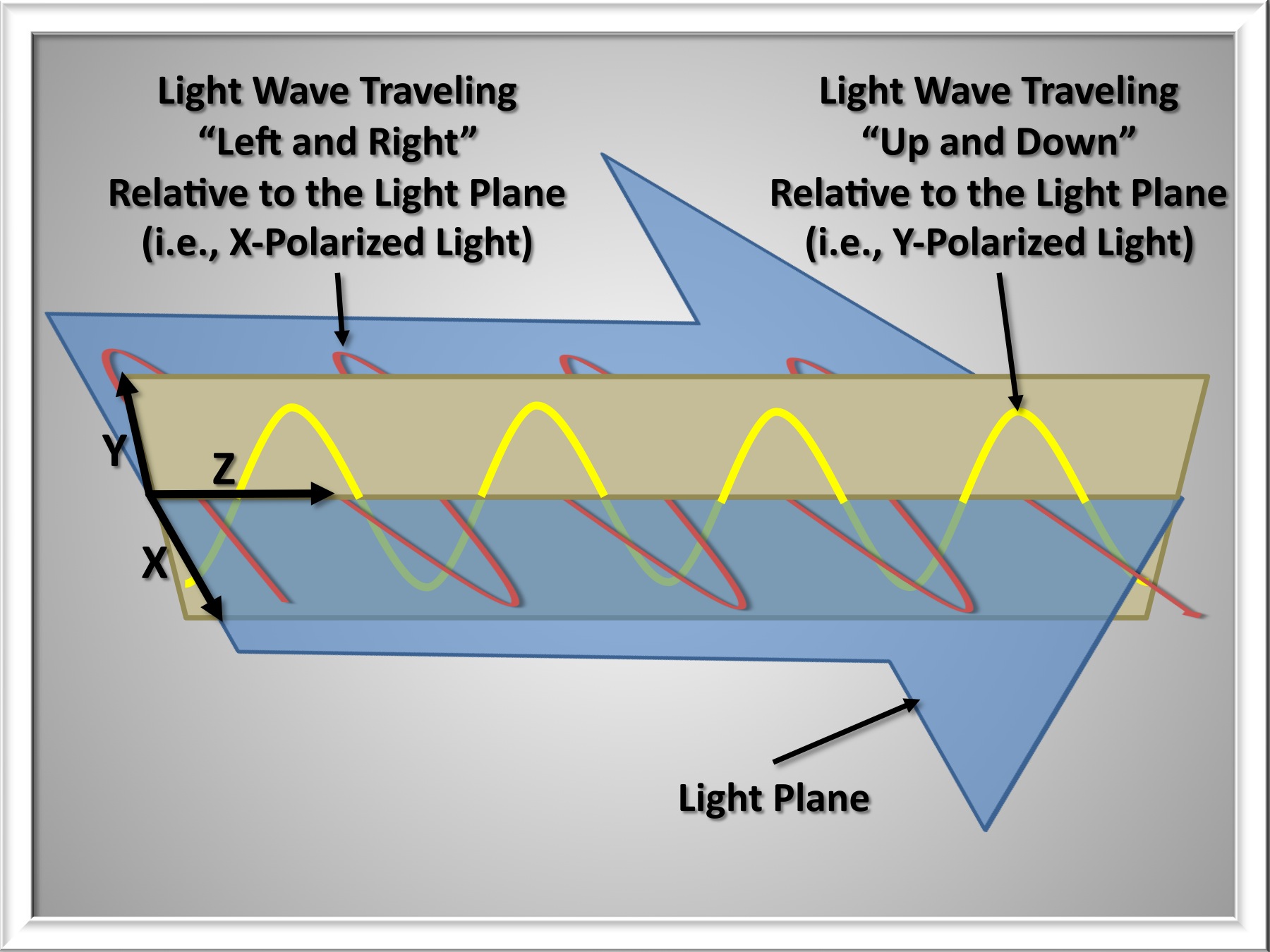 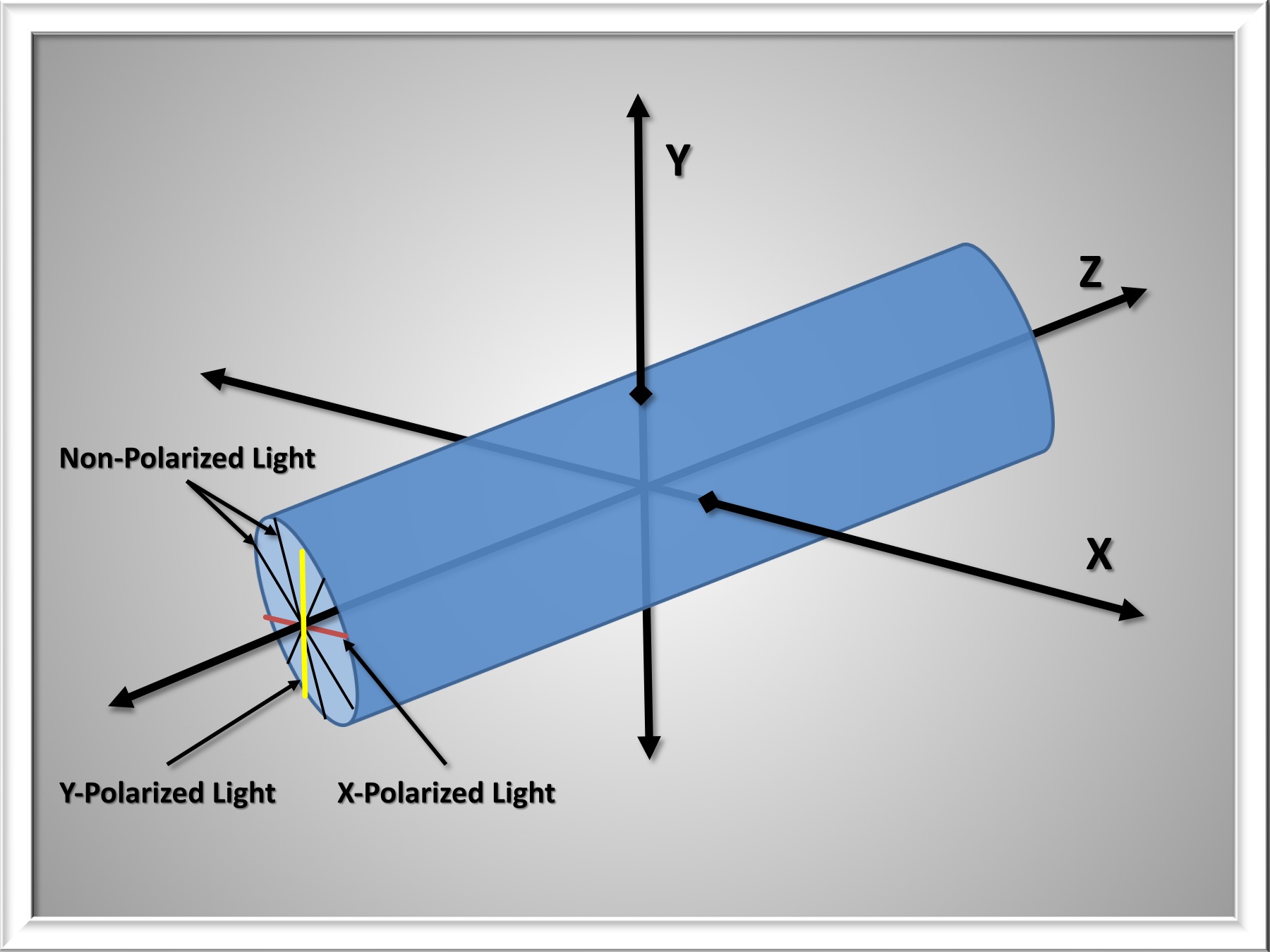 As light hits the surface of water or a shiny, non-metallic object, it becomes polarized; that is, all (or most) of the reflected rays of light end up oscillating in the same direction. In the top panel of Figure 3, as Y-polarized light beams hit the water, they become X-polarized. This would be true for light oscillating at other orientations too; once it hits the surface of the water it would become X-polarized. This is different than if light rays reflect off a non-shiny surface. In that situation, the light rays that are not absorbed by the object would reflect and continue oscillating along the same plane (see the bottom panel of Figure 3).

In the matched photos below, the polarizing filter remained on for both pictures only the orientation changed. This is what I mean by “On” and “Off.”

As I said earlier, light waves are polarized relative to some plane of light, but the polarizing filter doesn’t know what “up and down” or “left and right” are. You have to “tell” the filter what polarized means, and that’s where rotation of the filter comes in. As you spin the filter, the light that is considered polarized changes. With the filter set at one orientation, only Y-polarized light waves are considered polarized and so those are the ones that end up making it to your camera’s sensor. If you turn the filter 90° then, relative to the filter, the X-polarized light waves are polarized and are able to pass through. So in essence you can choose to see, or not see, the reflected light.In Figure 5 and other photos that follow, I illustrate this concept with photos that say “On” and “Off.” In the “Off” photos, the polarizer is still on the camera, it is just adjusted to allow in the reflected, X-polarized light. In the “On” photos, the filter is reoriented so that X-polarized light (and any other non-polarized orientation of light) is filtered out and Y-polarized light enters the camera. You can see in the On picture in Figure 5, that light reflected off rocks and tree limbs at the bottom of the lake makes it to the camera’s sensor, whereas in the Off picture you see the reflection.

Circular and Linear PolarizersThroughout this article, I talk about polarizing filters generally, but there are different varieties. There are linear and circular polarizers.  Both types work roughly how I described above. Circular polarizers take an additional step that further alters the oscillation of the light wave before it passes into the camera. To be honest, I didn’t understand much of what I read so I chose not to include any additional drawings or explanation. Suffice it to say that Circular Polarizers > Linear Polarizers, especially if you have a newer model of camera (e.g., if it has Live View). I used a circular polarizer to take all of the photos in this article.With this newly acquired knowledge, I set out to experiment. I took a few preliminary photos but didn’t really start using the polarizer until two recent trips; to Glacier and to Everglades National Parks. I generally try to get photos during the golden hours around sunrise and sunset, but there is A LOT of time to fill during the day when you’re on vacation. During those days I was out taking photos, I occasionally had beautiful, light-diffusing clouds but most of the time the sun was oppressive. Haze obscured beautiful vistas and harsh reflections made photos of lakes and rivers unviewable. The polarizer saved a lot of my pictures on those trips. Through this experimentation, I’ve learned a lot about when filters will help and when they won’t and how to get the most out of them. I want to pass this knowledge along. Maybe I can keep you from making the same mistakes I did, or at least help you feel less embarrassed when you encounter a similar situation. What I’ve Learned 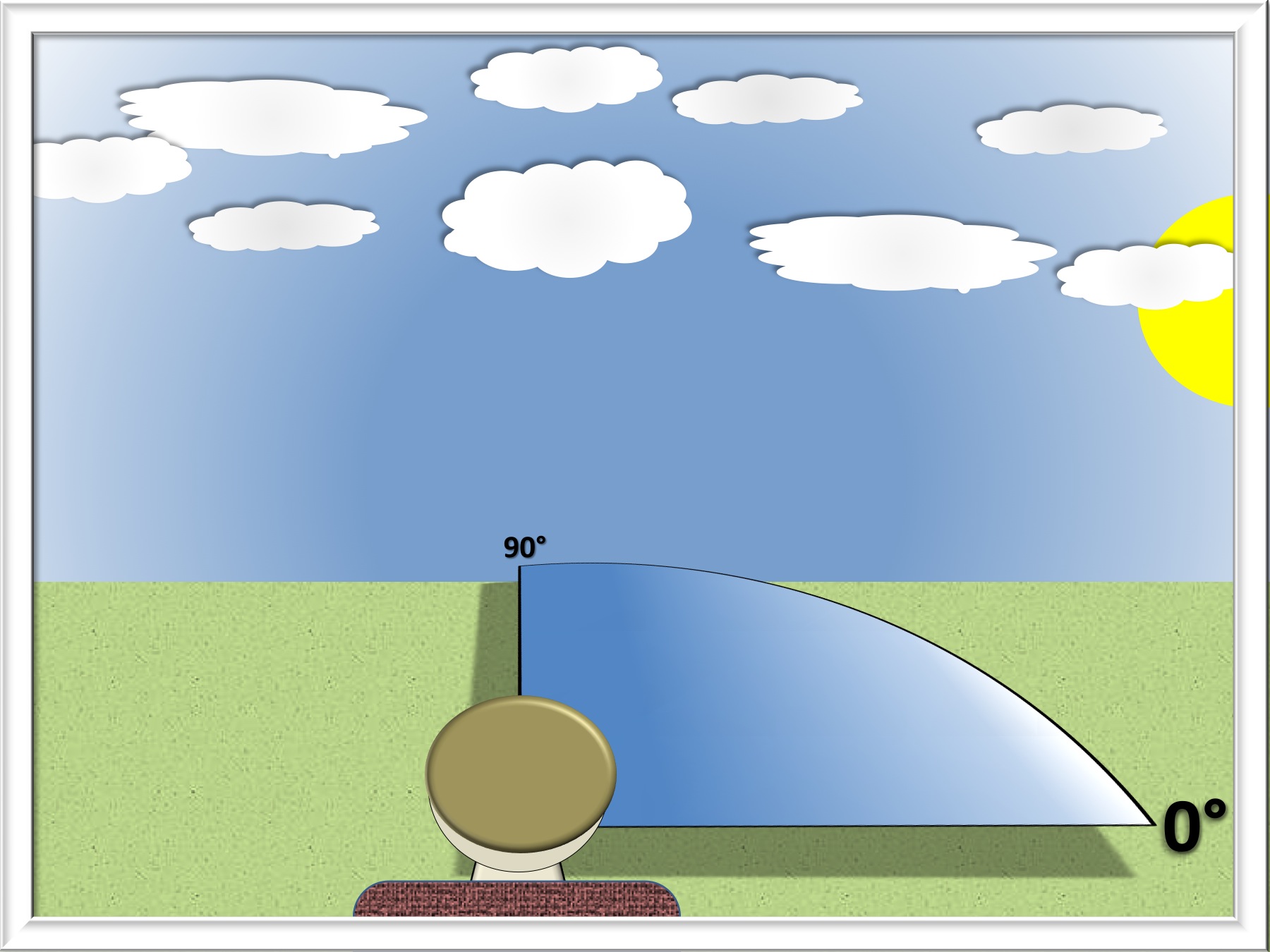 If you have any questions let me know using my CONTACT FORM.