Congaree is the 15th National Park I’ve visited since 2012 and I hate to say it, but it is my least favorite experience so far. I didn’t set this trip up for success by choosing to go during one of the hottest months of the year, but, there was plenty that I didn’t care for on this trip.  The shadows were harsh, the scenery not interesting, and 1/3 of my favorite part, the 2.5 mile boardwalk, was closed for repairs.  On top of that, there were spiderwebs; my god were there spiderwebs. I’d be willing to give the park another try, but it’s low on my priority list.

That said, a fairly easy 8 hour car drive and it’s proximity to some places that I definitely want to see again (Charleston, Savannah, etc.) might bring it back around sooner than I expect.

I only experienced a fraction of the park. There are trails, but the vast majority of the park is only navigable by canoe. If canoes were available right at the launch sites, I may have tried it out, but I didn’t feel adventurous enough to strap one to my car. So I mainly walked the 2.5 mile boardwalk and some small bits of regular trail.

Congaree has a different visitor pattern than many places I’ve visited where the traffic peaks in the summer and drops off during the rest of year. The hot, humid southern temperatures actually lead to the opposite. The wet Spring season and the Fall colors along with the cooler temperatures help to boost visitation.  Despite being free and close to Columbia, this is an undervisited park.

The weather when I visited Congaree was typical for August; hot and humid. It was in the 90’s and I sweated through my clothes both days I was there. That weather also increases the likelihood of strong afternoon thunderstorms and I saw those while I was there as well.

I stayed at the Country Inn and Suites in Columbia, SC. It’s a 25 minute drive from the park, but there aren’t many closer options.  It was a nice hotel and, due to the rain, I spent a lot of time there.

My hotel was in a cluster of hotels outside of Fort Jackson and within Columbia, a city of about 130,000 people. All of the typical food options are available. I ended up going with Panera and groceries that I brought with me.

I spent a total of 4 hours in the park over two visits.  I’ll explain below why I didn’t stay longer, but 4 hours is about average.  Both of my visits to the park ended up being roughly the same. Both times, I walked the boardwalk loop, took some photos, and left.  The swampy areas of the park dry up in the Summer. That was both disappointing and a relief. I think swampy reflections would have made my photos more interesting, but the mosquitos were mercifully absent without all that standing water to multiply in.

I left my house in Silver Spring, MD at 4:15 a.m. and drove straight through to the park, stopping only for gas. I got a little lost on the way there, but the trip took around 8 hours. I arrived a bit after noon.  I checked out the Visitor Center and looked over the map.  I then started walking the 2.5 mile Boardwalk Loop Trail.  There were a dozen or so cars in the parking lot, but I only saw 3 groups while I was out. It was nice that way. There was construction going on to fix part of the boardwalk that had been damaged during a recent storm so there was a constant buzzing of saws. 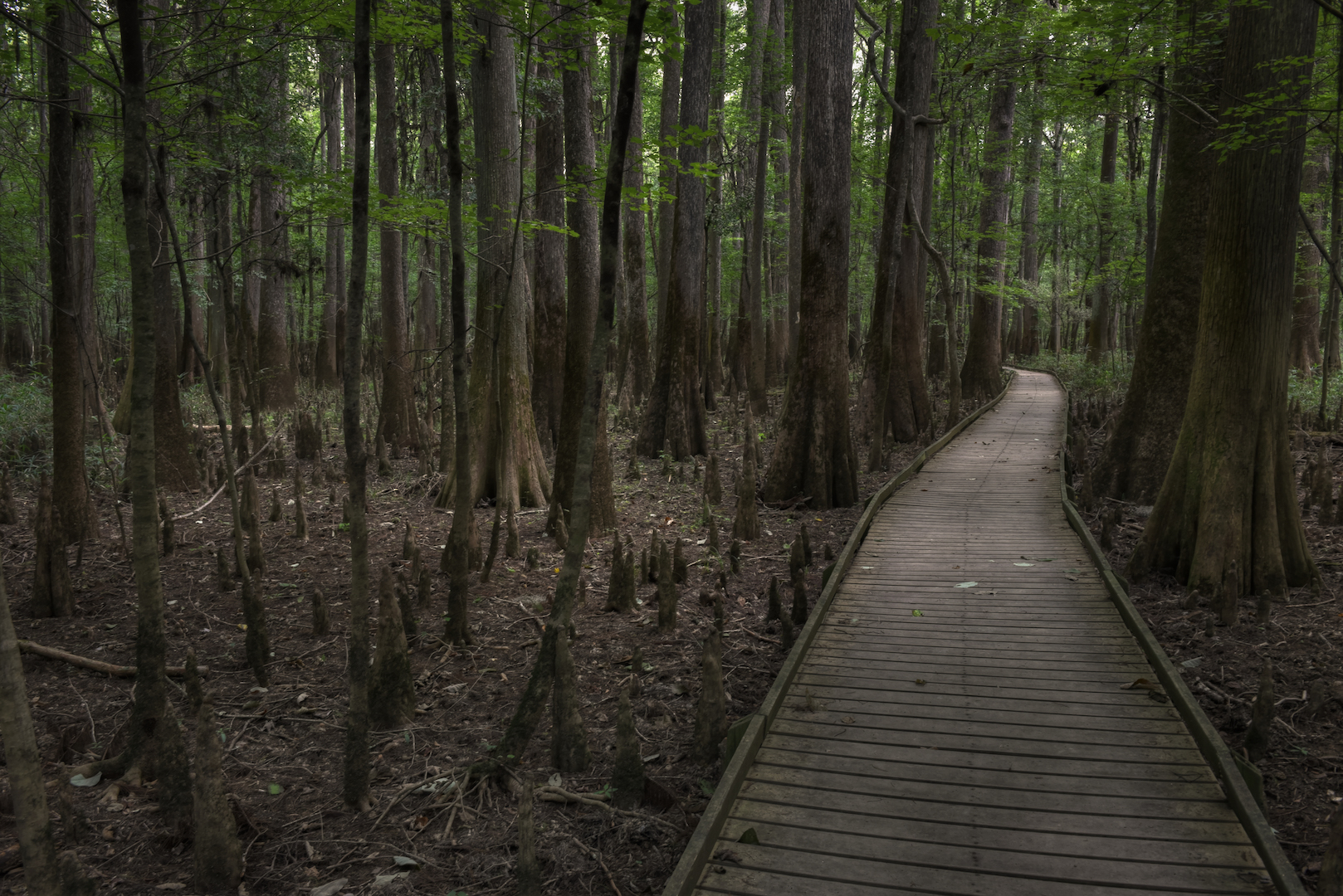 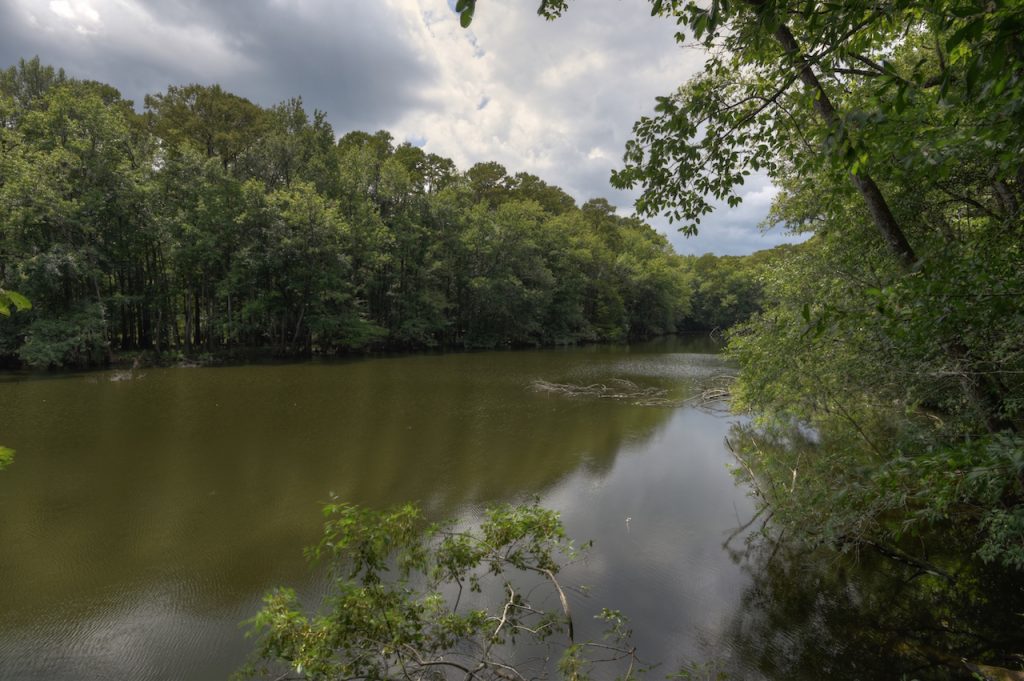 During my eight hours in the car, I had heard a number of reports about severe afternoon showers on the way, so I was mindful to hurry up and not venture too far. A couple patches of light rain came down while I was hiking, but the trees blocked most of it.  I walked half of the loop to Weston Lake. It was there I found the sign saying that the rest of the trail was closed for repairs. So I doubled back and walked the Sims Trail across to the other end of the construction zone and followed the rest of the boardwalk back to the Visitor Center.

As soon as I got back in my car, rain started to pour down. It was about 2:30 at this point, so I drove to check into my hotel.  The rain was so bad that it was difficult to drive.  The rain never let up for more than a few minutes at a time the whole rest of the evening so I didn’t go back to the park.  I reviewed the map and planned my adventure for the next day.  I decided that I would hike the Boardwalk Loop Trail again, but also add on the Weston Loop Trail, effectively walking a 5-mile figure 8 through the park.

There aren’t really any sunrise locations in Congaree; nothing that has an open view of the eastern sky. I was hoping to get soft, early morning light beaming through the trees, so I arrived at the park around 7:30. I was the first person there that morning. The parking lot was empty. If I had any doubt that I was the first person, that went away about 20 feet down the Boardwalk Loop Trail when I ran face-first into the first spiderweb constructed right over the path.  The first of many.  I continued down the trail running into spider webs every few feet. I brought my umbrella with me in case it rained again and I resorted to waving that in front of me as I walked like I was fencing with an invisible opponent. It didn’t do much good. I still ran into at least a hundred spider webs, probably more since I’m sure there were some I didn’t feel. It gave me the heeby-jeebies. It got so bad that, when I made it to Weston Lake, where you first leave the boardwalk, I decided to turn back because it was just too much.  I went back along the Sims Trail instead of the way I’d came and managed to find even more spider webs. By the time I got back to the car, I was stressed out and feeling imaginary spiders on me. Somehow I managed not to get a spider on me after all that, at least none that I saw.

Enough about the creepy spider webs. I wanted to give you the play-by-play of that just so you had an idea of what you’ll be up against, especially if you’re planning on getting there early.  I will say, the park was much more picturesque after the rain and in the early morning light. It was still a bit cloudy so I didn’t get my light rays, but I did have soft, diffused light. 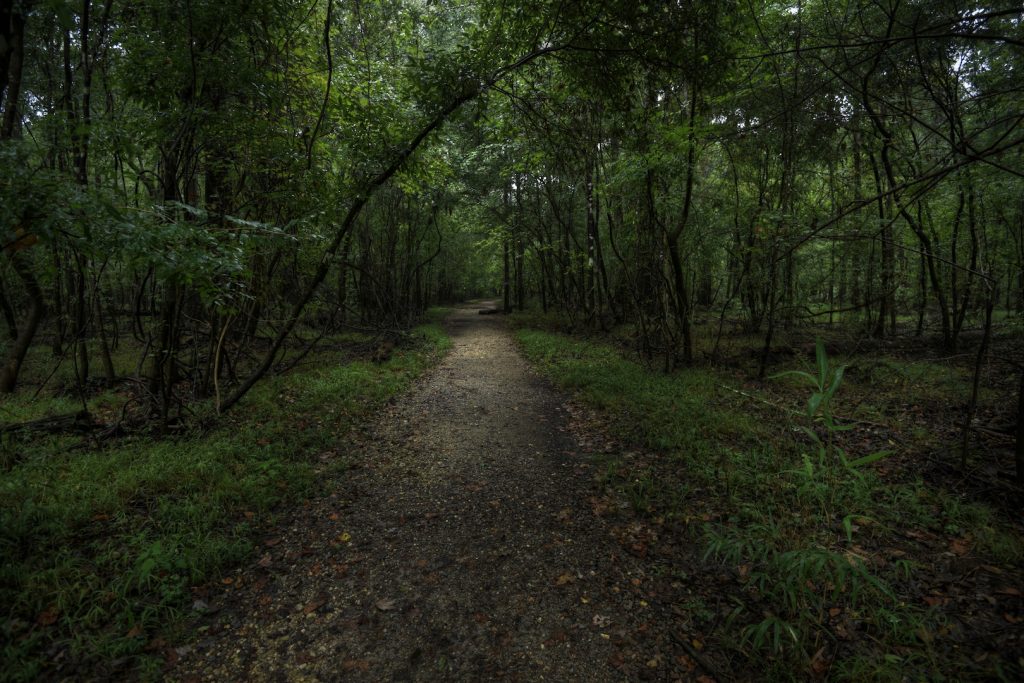 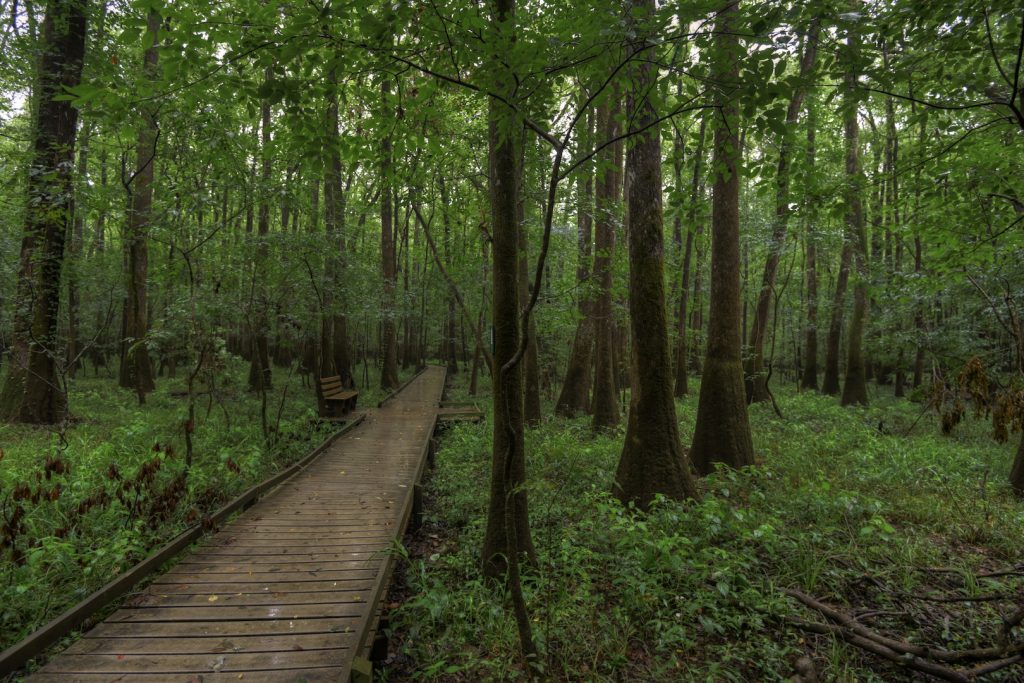 The hike around the Boardwalk Loop with frequent stops for pictures took another 2 hours.  I was back in my car by 10 and heading to Charleston.  I did stop right outside the park to take a photo of a neat, abandon convenience store.  Charleston redeemed this trip for me and I highly recommend it. 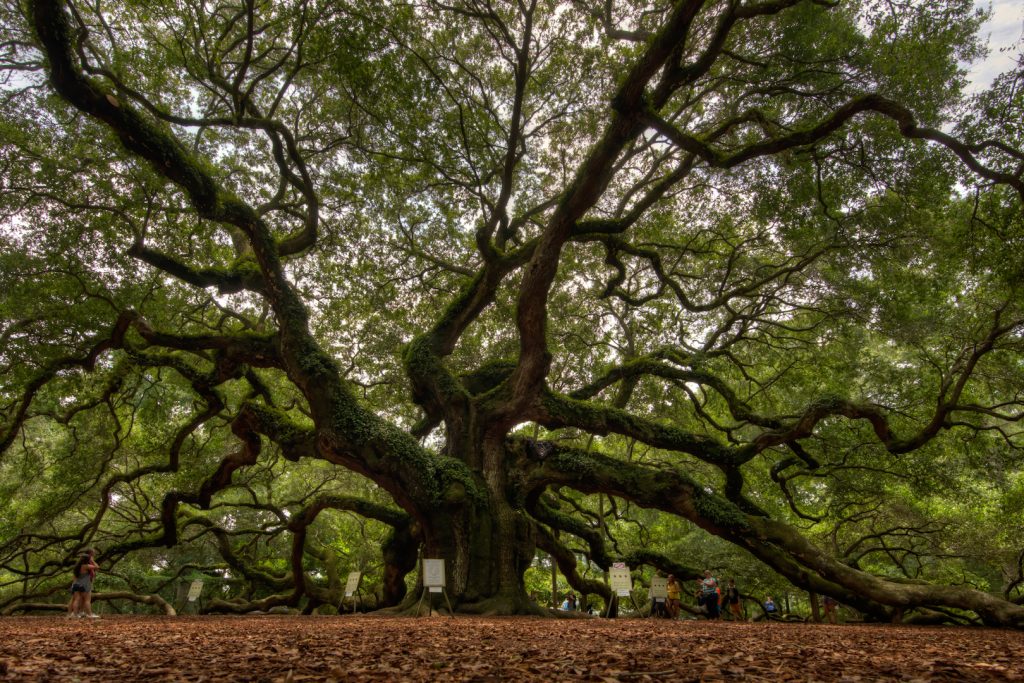 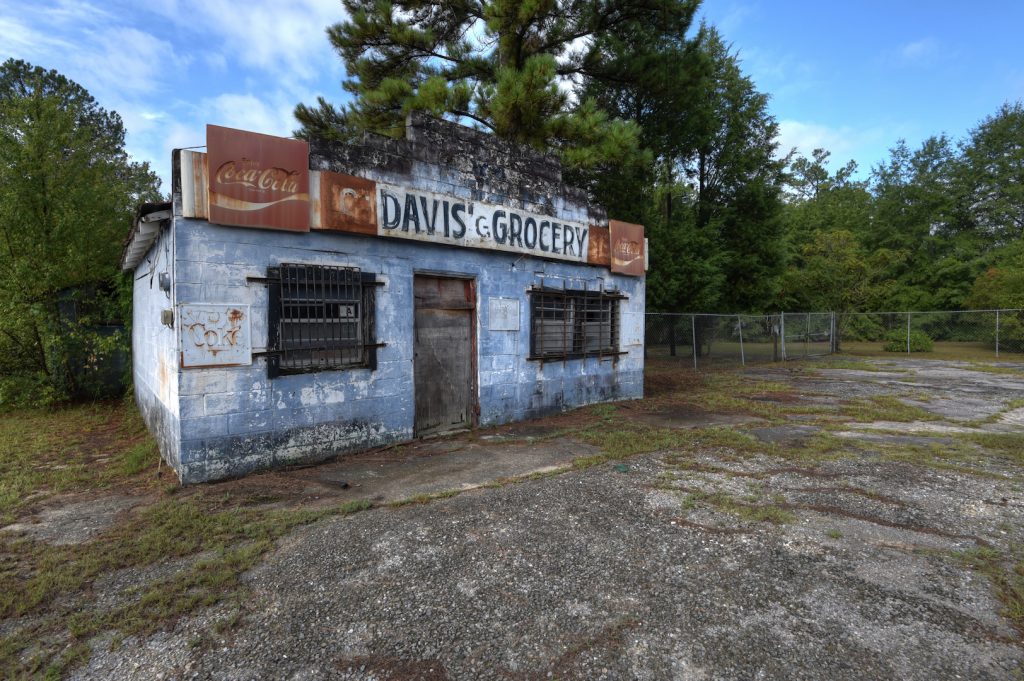 I think the obvious first solution to my lackluster trip would be to pick a different time of year.  If I go back, it will be in April. A ranger at the Visitor Center said that that was the best time to see Congaree in all of its swampy glory.  The temperatures will also be a bit cooler.  I would also like to try canoeing or kayaking in the park. I would also like to complete that Weston Lake hike along with one or two of the other trails. There is a lot I didn’t see on this trip and that could probably turn my opinion around.

I love boardwalks. I love trails too, but boardwalks are cool because they are this melding of the human world and nature. I’m a bit compulsive so I like that boardwalks are orderly.  In reviewing others’ photos of Congaree, it was obvious that the boardwalk was going to be the highlight for me. That probably isn’t surprising given my description above. I spent almost my entire 4 hours in the park on it.  My favorite part of the boardwalk was the stretch pictured here where the path curves through some trees. It gives it some additional personality.