Mammoth Cave National Park is my third visit to a national park known for it’s cave system. To be honest, I am not a fan of caves (caverns are a different story). They are not particularly photogenic and that is the primary reason I go on these national park trips. They are dark (obviously) and you can’t bring your tripod in because they would be obtrusive. You also have to travel with a tightly packed group so that the rangers can keep an eye on your and protect the fragile ecosystems in the cave. When I take photos, I want the photo to be of something that tells a story about where I’m at. Given the above conditions it is difficult to take a photo that conveys you are in the longest cave system in the world.  All this adds up to mediocre photos and mild enjoyment for me.

Another issue that hurt this trip was that I planned it from start to finish in less than a week, which is rare for me.  I had to pick my dog up in Nashville from a couple who had watched him while I was away on a National Guard deployment so I figured I would swing through Mammoth Cave on the way.  I could definitely have done a better job planning what to do above ground and that would likely have bumped this trip up in the rankings.

This is a pretty boring map because I didn’t plan much before I went. I basically planned on taking some cave tours which all start around the Visitor Center.

I visited in late July/early August on a Monday and Tuesday. Since it was Summer, I was expecting a lot more commotion than there was. The tours that I went on seemed full, but I didn’t buy my tickets until I showed up and had no problem getting a spot and I managed to rent a cottage near the visitors center with only a week’s notice.

The temperature was warm and it was humid, but I had spent the prior 2 weeks in El Paso, TX and the previous 8 months in Kuwait so it felt kind of nice actually.

I stayed at the Woodland Cottages which are a short walk from the Mammoth Cave Visitors Center. They were great. They had a small fridge and a full-sized bathroom.  I was very happy to get something in the park during the summer given I had made reservations only the week before.

There are other options such as camping and The Lodge at Mammoth Cave.  The lodge looks like it has nicer rooms and it is a bit closer to the Visitors Center, but I really liked the cottages and would highly recommend them.

I drove from home so I just brought groceries that I already had. I did buy a sandwich at one of the concessionaires in the Mammoth Cave Lodge, but I don’t remember which. 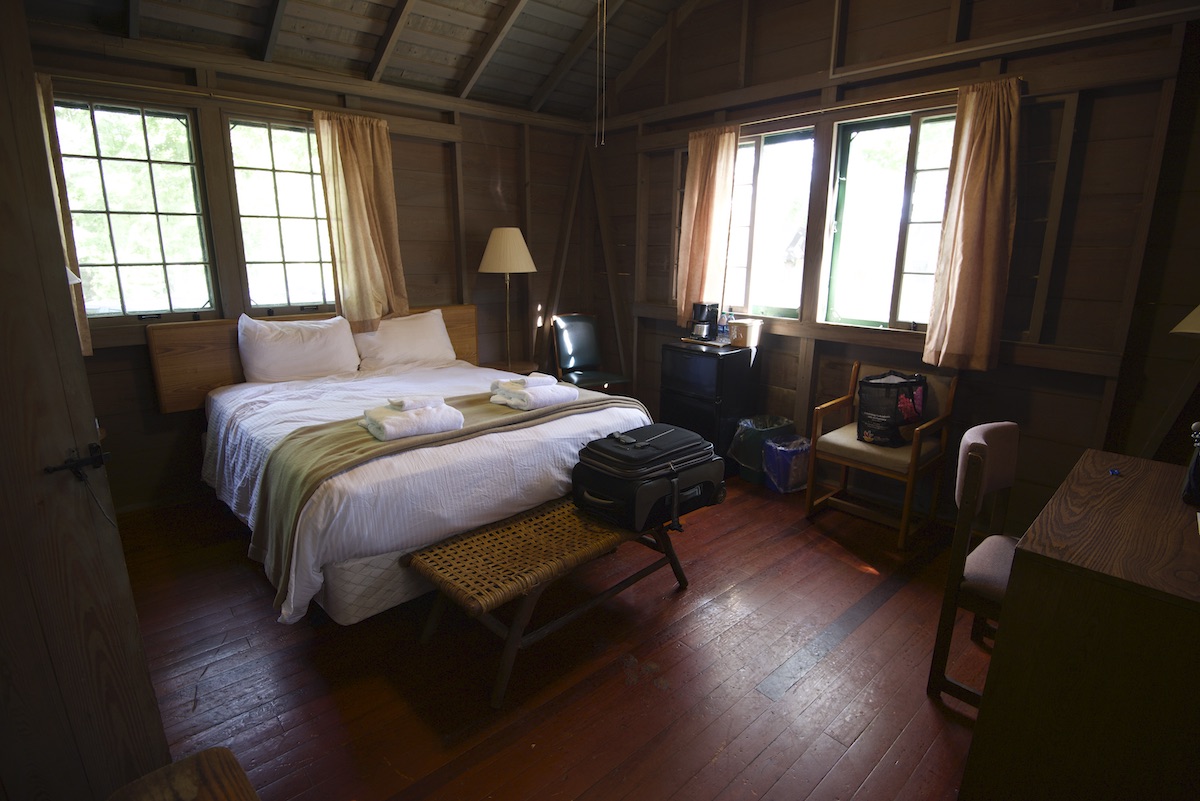 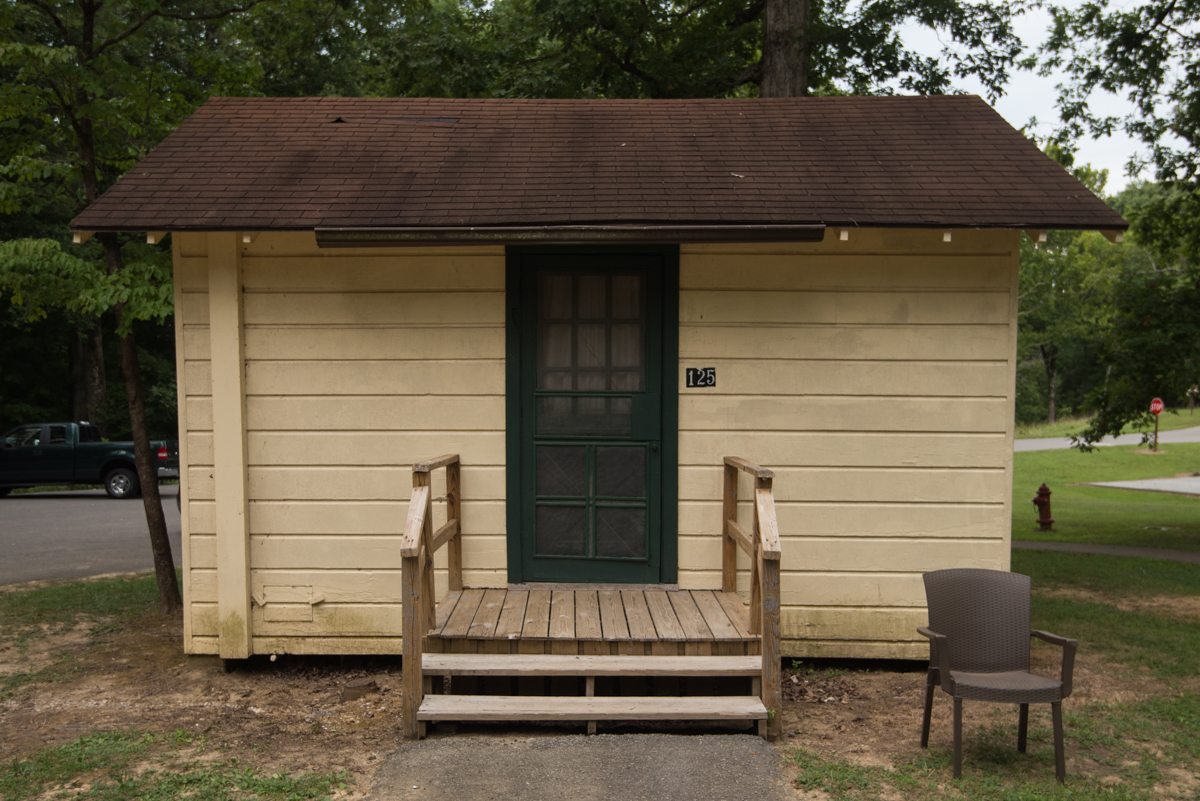 I spent about a day and a half in the park. I drove down from Washington, DC early one morning and spent the rest of that day in the park, taking one tour then exploring a bit around the Visitor Center area. The following day, I took two, back-to-back cave tours and then spent some more time exploring above ground. I took off well before sunrise the next morning to get to Nashville.

On Day 1, I woke up around 3:30 a.m. and started driving. It’s a roughly 10 hour drive with a 1 hour time difference so I made it around 1 p.m.  I went straight to the Visitor Center and looked to see if there were any tours available.  I purchased a ticket for the Mammoth Passage Tour which is a short, introductory tour and one of the few remaining tours that afternoon.  While I was there I also purchased tickets for two tours the following day.

The Mammoth Passage Tour starts at the Historic Cave Entrance which is a quarter mile downhill walk from the Visitor Center.  For the tour, you walk into the cave, hang a right, and walk a short distance to a dead end. You get a good introduction to the history of the cave as well as views of some of the larger open spaces.

After the tour, I checked into my cottage and got everything moved in. After some dinner, I went out walking on the hiking paths near the visitor center. There are a series of short (< 1 mile) paths that snake their way down and along the Green River.  One of the main things to see on these trails is the River Styx Spring, where water flows out of the cave and into the Green River. It was pretty dry when I was there so nothing much to see.  I walked a few of the other off-shoot paths before calling it a night. 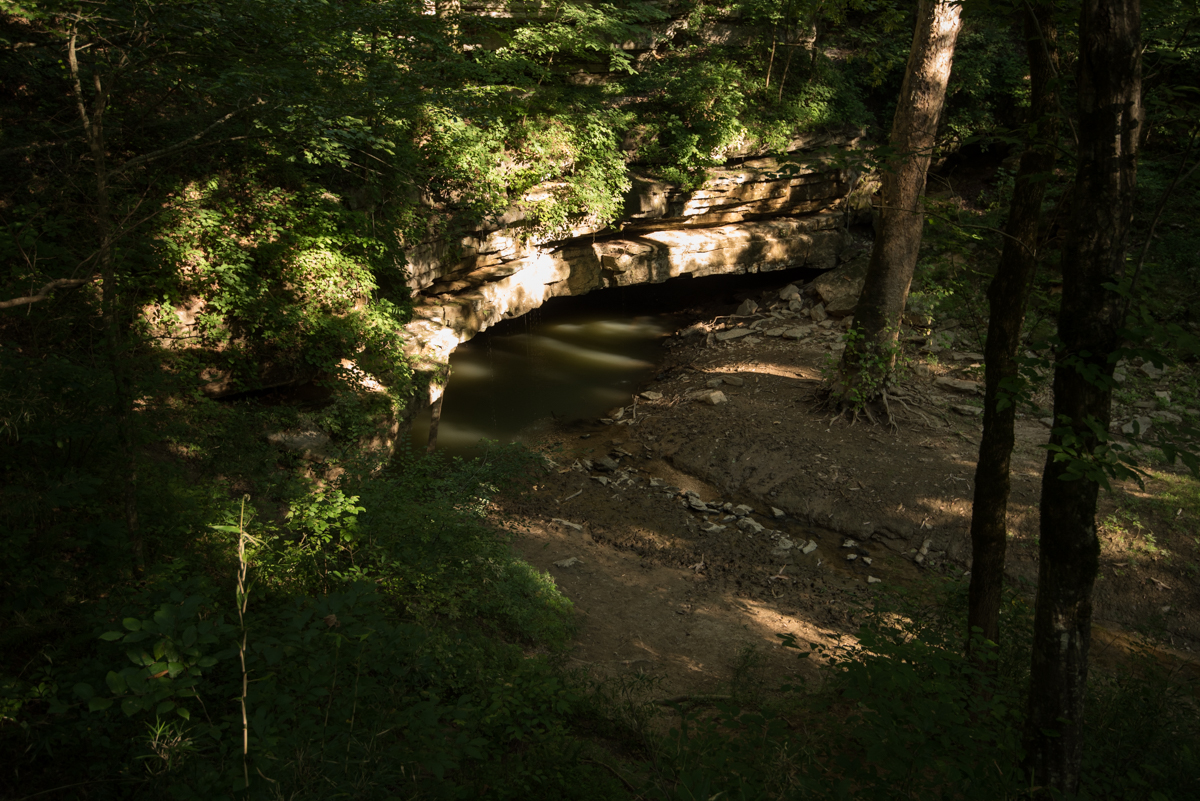 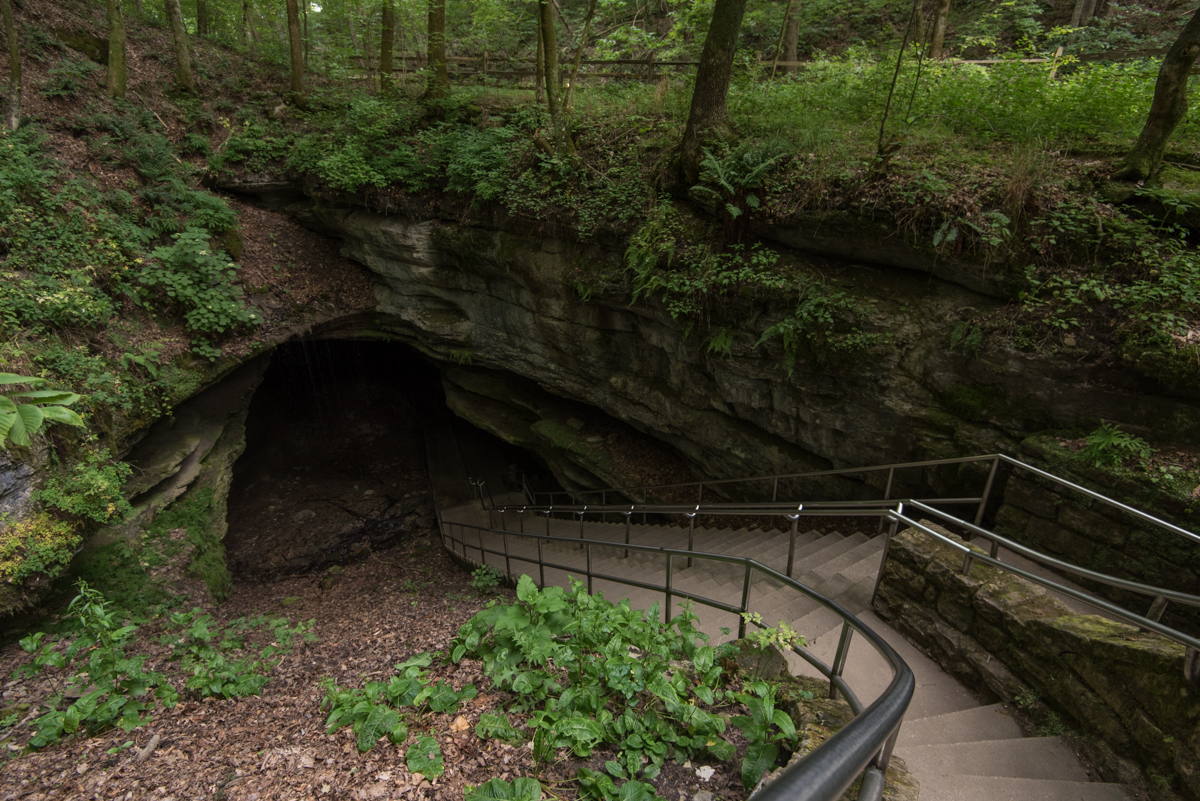 I didn’t do anything for sunrise the next morning because I hadn’t done any research and couldn’t easily find a place that wasn’t completely enclosed by forest. So I hung out until around 9 when the Grand Avenue Tour kicked off. This tour is 4 hours and  4 miles long ending in a climb up a long stairwell. A few rangers accompany you on the tour and one is always in front of and one always behind the group making sure to herd people all together. This makes it difficult to get photos forward down long passageways or backward. So if you want photos of the cave you mainly have to photograph off to one side or the other. Even if you can manage to hold the camera still enough to take a decent photo, you will almost certainly have a blurry person moving through your photo if you want a photo that includes the walking path. I found this frustrating but kept photographing anyways.

In the early afternoon I took the Historic Tour which passes through the Historic Cave Entrance, but rather than going to the right like the Mammoth Passage Tour, you go to the left. This tour is 2 hours long and about 2 miles worth of walking with a fair number of stairs.

That evening I went driving, trying to find something that looked worth doing. I ended up at Sloan Crossing Pond. There is a < half mile raised wooden path around the lake.  I spent about 45 minutes there before heading back. It was still too early to turn in so I walked back down to the Historic Cave Entrance and tried taking a few more photos there before calling it a night.  The next morning, I woke up early, drove to Nashville to pick up my dog, and then immediately drove home…a total of ~13 hours in the car. 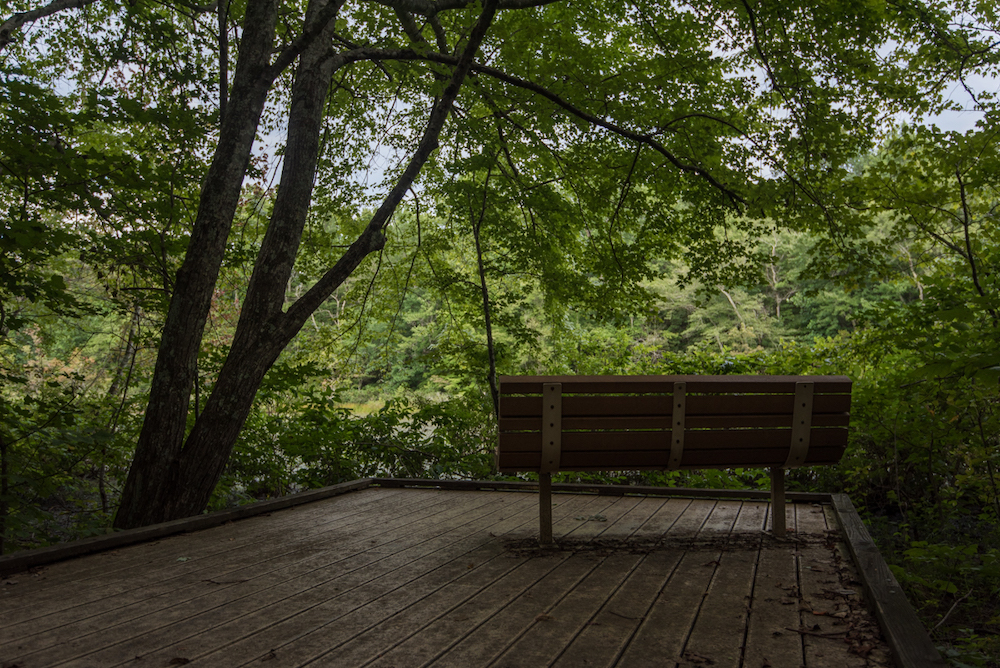 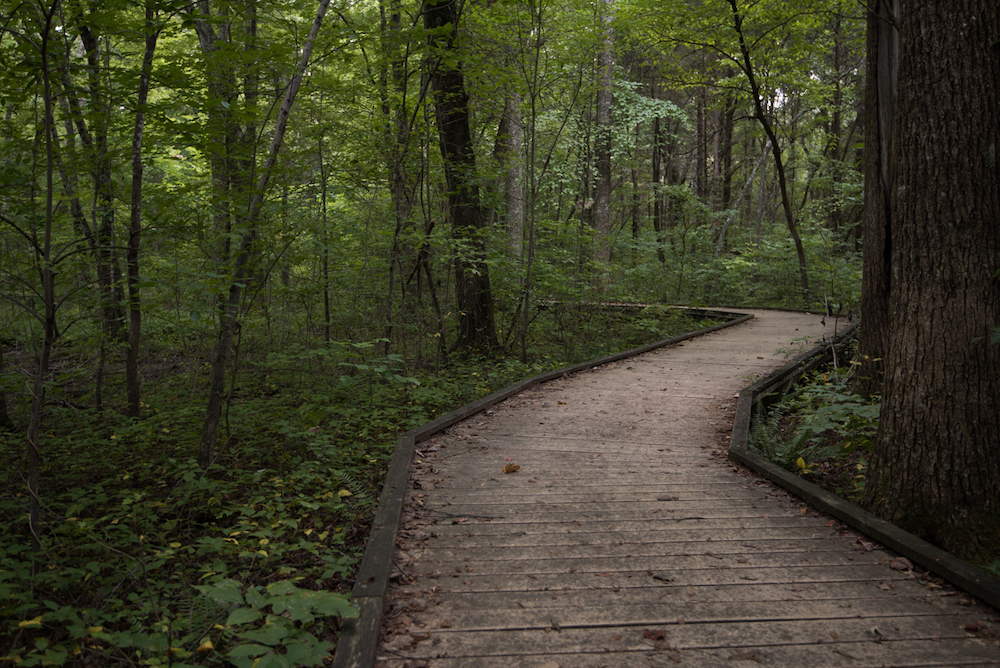 If I go back to Mammoth Cave, and I’m not sure if I will, I will definitely do more research before going. I would find a lot more things to do above ground since you can only occupy so much of your time with cave tours.  I talked to the rangers at the Visitors Center and they said that there are tours offered (mostly in the off-season) that cater to photographers; allowing tripods, allowing more time for setting up photos. They could never offer any specifics and I’ve never seen anything on the NPS’s website so I am skeptical, but I would definitely go back for a tour like this.

I didn’t have time to dig through others’ pictures of Mammoth Cave and daydream about that one shot that I had to have.  I just knew that I wanted some sweet cave photos.  That didn’t really pan out as I’d hoped, but I did get a few OK ones.