Petrified Forest National Park is the 23rd park I’ve visited and it was one of the most disappointing. Part of that is my fault. I didn’t do my research so I didn’t find out until I showed up that the park is open during daylight hours only…banker’s hours really; 8 a.m. to 5 p.m. (7 a.m. to 6 p.m. during peak season).  When I went that meant the gates opened after sunrise and closed before sunset. My guess is that that is 50% trying to safeguard the petrified wood and 50% lack of funding for staff (I didn’t see a single employee outside of the visitor centers the whole time I was there).   I don’t blame the park, but it was disappointing to have to miss sunrise or sunset shots and the sky was cloud free the whole time I was there which made for mediocre photography conditions.

With that out of the way, I did like the fact that the weather was much warmer than my time in Northern AZ, including the Grand Canyon. I also appreciated the relative peace and quiet after the bustle of Page, AZ.  My time in the park was limited to one afternoon and one morning.

Petrified forest is a large park, but most of what people come to see (and all of what I saw) is along the main park road. There are hikes that range from half a mile loops to 1.5 mile out and backs. For the most part, the hikes are flat, many are paved.

I visited in February, definitely the off-season. I also went during the week. I never saw more than 4-5 people at any location and I went long periods of time without seeing anyone at all.

The Petrified Forest was my last stop on a 9-day trip around Northern Arizona. I visited the Grand Canyon; Page, AZ; and Monument Valley and was hit by snow in all three places. I had one morning with temperatures around 0 degrees Fahrenheit in the Grand Canyon, so the 50’s and 60’s I experienced in Petrified Forest made for t-shirt weather. I did have a light jacket on hand that I wore in the mornings.  Otherwise, the weather was nice otherwise. No wind, but also no clouds which made for some pretty harsh lighting conditions.

I stayed at the Howard Johnson in Holbrook, AZ which is a quick 25 mile drive along I-40 to the park. The Howard Johnson is on the outskirts of Holbrook and one of the closest to Petrified Forest. They had a decent breakfast and the room was comfortable.

By the time I made it to Holbrook, I had eaten most of the groceries that I purchased at the beginning of the trip. I finished up what I had left, but also got dinner at Mandarin Beauty Chinese Restaurant and I also ate lunch and dinner on my second day at Aliberto’s Mexican Restaurant. Maybe it’s just because I don’t live in the Southwest, but I the burritos I had at Aliberto’s were some of the best I have ever eaten.

I spent a total of 8 hours in the park; four hours in the afternoon on the day I arrived and four hours in the morning the following day. I planned to spend longer, scouting out sunrise and sunset spots, but that plan was thwarted once I found out the park opens late and closes early.

On the morning I arrived in Petrified Forest, I woke up in Monument Valley along the Utah/Arizona border. I shot sunrise there and drove the main park loop one last time before heading south. It is a long(ish), fairly boring drive of about 3 hours.  I made it to Petrified Forest about 1:00 in the afternoon. On my way through the gate, the ranger told me that I needed to start making my way toward the exits around 4:30 and that I need to be out of the park by 5:00. That was the first I had heard of that (due to me not reading the clear language on their website). So for that first day, I decided to just drive the park road, stop at all the turnouts, and get the lay of the land. 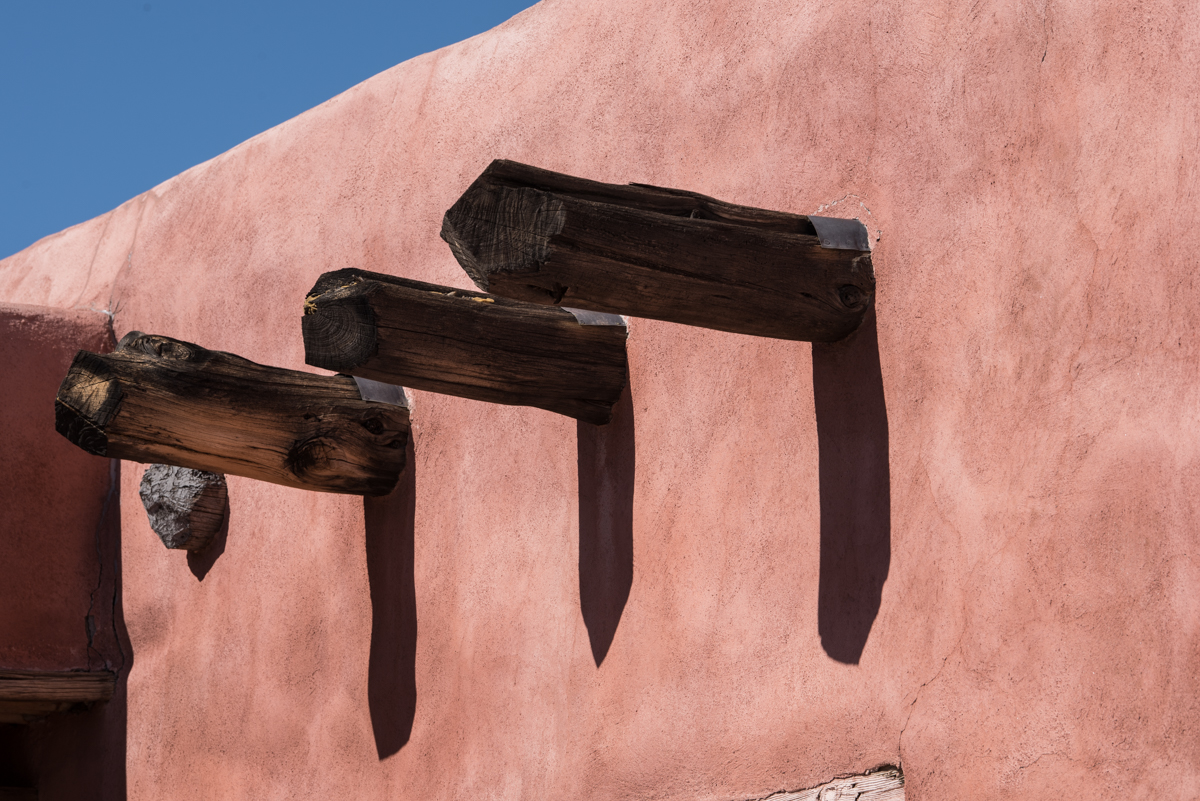 I started at the Painted Desert Inn and worked my way down to the South Entrance/Exit and the Long Logs Trail. Along the way, I walked the loops at Blue Mesa and and Crystal Forest. Otherwise, I got out, snapped a few pictures, and the moved on. I spent the most time at the Long Logs Trail. I started that hike around 4 p.m. and was worried about getting pushed out at some point during my hike. But it turned out to not be that long…about a mile in total and I mostly kept moving with brief stops for photos.  I got back to my car and passed through the gate right around 5 p.m.

The next day I had a leisurely breakfast and then drove to the park, arriving around 7:30 a.m.; half an hour before it opened. There were a few people waiting in the small parking lot outside the park. Once the gates opened, precisely at 8:00, most of those people went to the visitor center and I saw very few people throughout the rest of my trip. My first stop this time through the park was an old rusted-out car along the historic path of Route 66 which used to pass through the park.  I snapped a few photos there and then proceeded south. 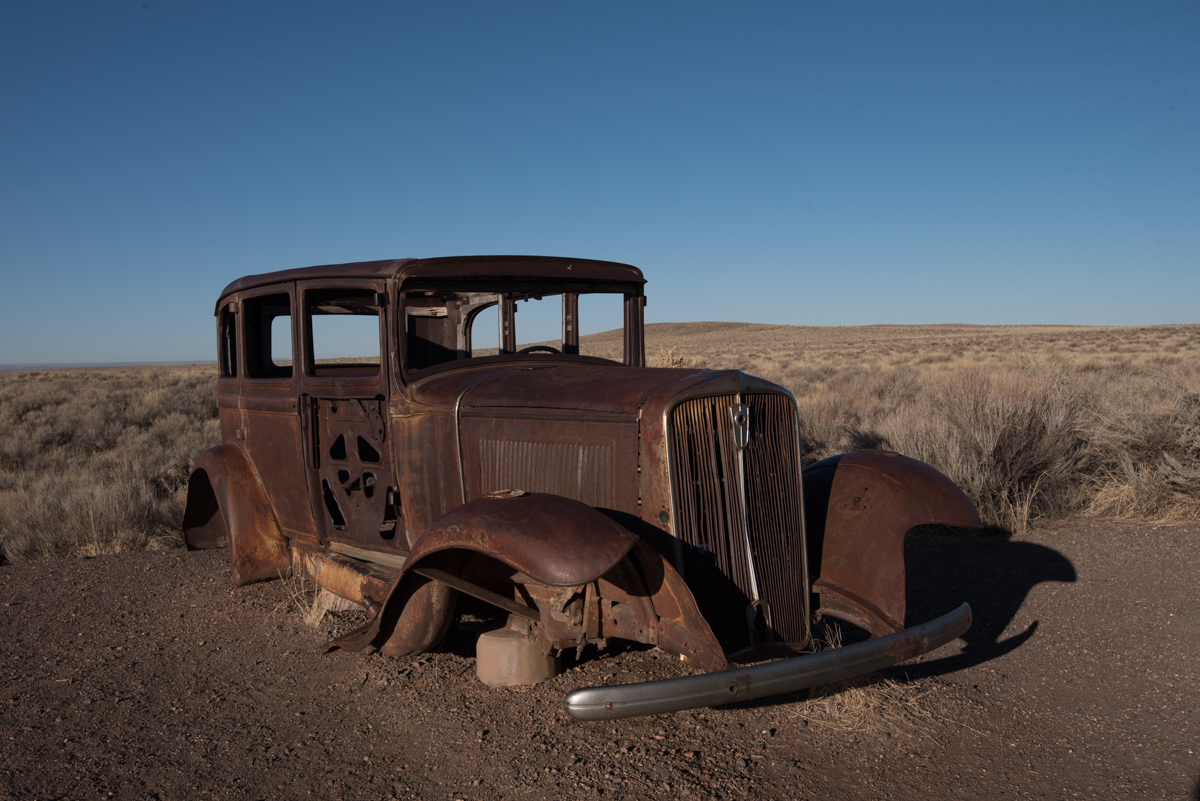 My plans for Day 2 ended up being very similar to Day 1. My goals were to (1) stay ahead of the people who came into the park early and (2) try taking photos with my 70-200mm lens and using a circular polarizer to cut down on the glare from the harsh sunlight.  I went back to Blue Mesa and walked the loop there. I spent a bit more time than the day before, trying to get panoramas, some shots including myself for scale, and some other creative shots.  I then went back to Crystal Forest. It was there that I first tried out the circular polarizer and realized what a big difference it made in bringing out the colors in the petrified wood. At that point, I was basically recreating most of my shots from the previous day, but this time with the filter.

I stopped at Jasper Forest and Agate Bridge and wasn’t impressed photo-wise so went back to the Long Logs Trail and took the side path to Agate House. I spent a bit longer walking Long Logs than the previous day.  I finished my Petrified Forest experience with a visit to the Rainbow Forest Visitor Center and a walk around the Giant Logs Trail.  I was out of the park by noon that day. I would have went back for sunset but…we already covered that. 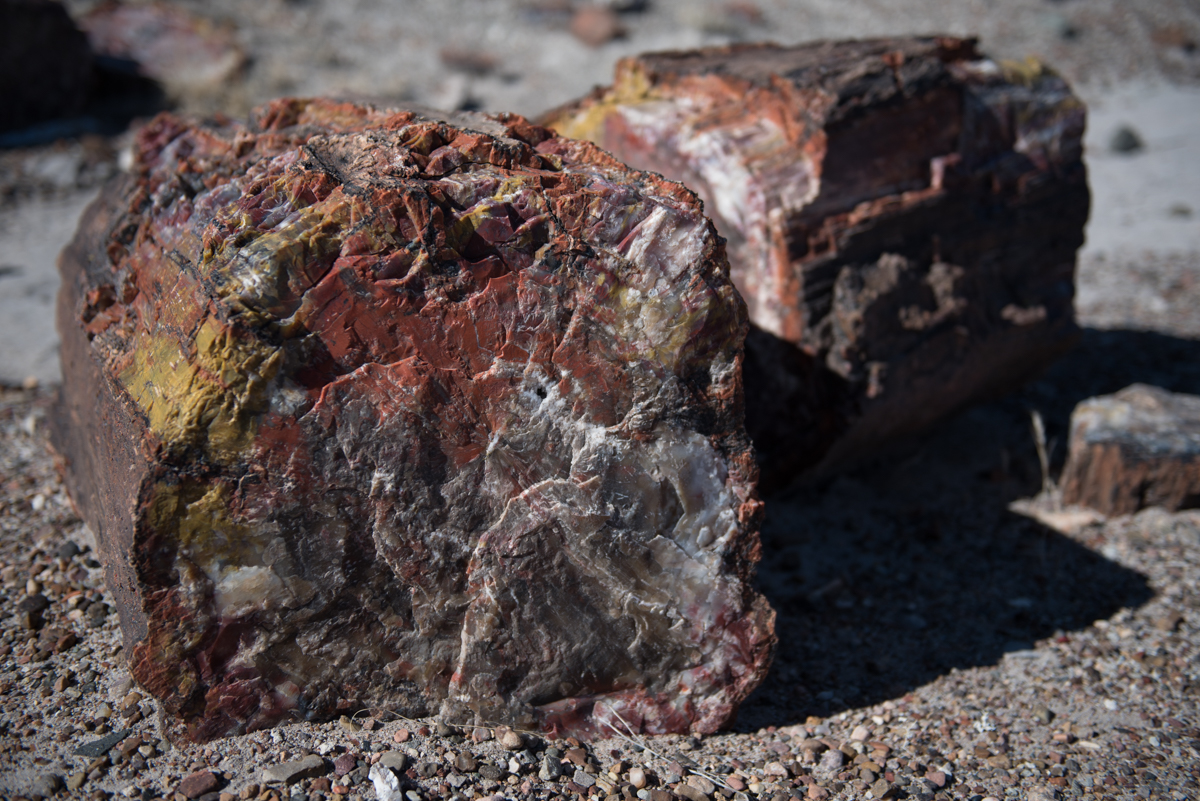 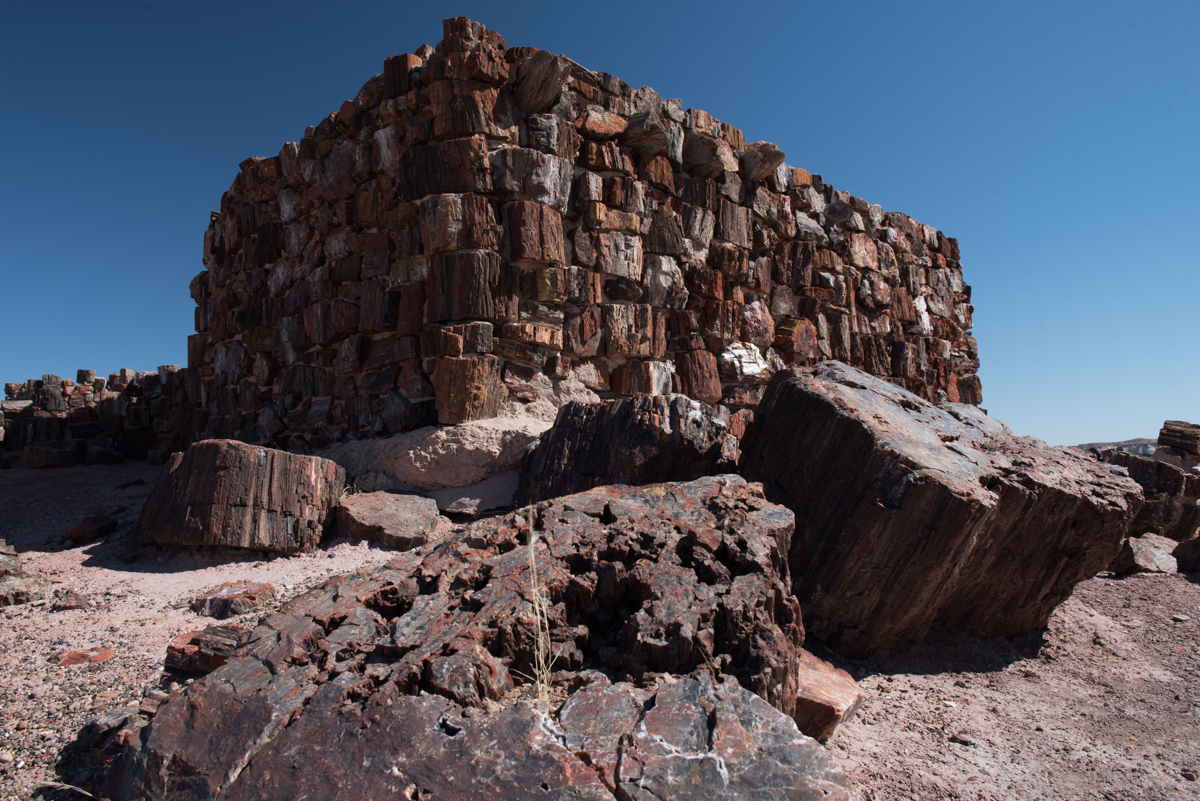 I spent the rest of the day around Holbrook; editing photos in my hotel and checking out some of the kitschy Route 66 places around town. I did spot one wonderful motel that I had to visit around dusk when I could capture the neon lights; The Wigwam Motel.  Those were the last photos I took in Arizona.  The next morning I made the 3 1/2 hour drive to Phoenix and flew home.

One of the greater missed opportunities was spending more time photographing the Painted Desert at the northern end of the park. There are several hikes that I could have taken around there, but passed because I thought I couldn’t get decent photos because of the cloudless sky.

Despite my whining about sunrise and sunset photos above, I didn’t really have any firm plans on what locations those would have been at; probably because I hadn’t seen anyone else’s sunrise or sunset photos.  What I was most excited about was close-up photos of cross-sections of the petrified logs. I borrowed my macro lens to a friend otherwise I would likely have spent a good deal of time working on really tight macro shots. Instead, I used my 24-70mm and 70-200mm to experiment with different compositions. The photo below turned out to be my favorite angle. I loved capturing the still wood-like bark along with the colorful crystalline innards of the logs.