The National Park system has some unbelievable scenery, but nothing that prepared me for what I saw at Carlsbad Caverns. The amount of wide-open, underground space is…perspective altering. I visited Carlsbad Caverns as part of a trip around West Texas and Southern New Mexico. I split two days between  the Caverns and Guadalupe Mountains National Park before heading off to White Sands National Monument.  If I’d known how spectacular the cavern would be, I would have spent another day and went back down to try to replicate that feeling I had when I saw it the first time.

One highlight from the surface world was the bat flight program where, at sunset, you can sit in the park amphitheater and watch hundreds of thousands of bats fly out of the cave and fan out to find their evening meals. No photography, videography, or electronics of any kind are allowed, but it is a spectacular experience to just drink in.

So, only two main activities, but the cavern alone is enough to make Carlsbad Caverns one of my favorite parks that I’ve visited so far.

From the little bit of research I did before heading to Carlsbad Caverns, there weren’t many photo opportunities above ground so I focused all of my attention on the caverns. The map below was as far as I got with labeling the surface and this accurately represents my above-ground experience.

I toured the cavern on a Friday in late May. There were a fair number of people there, but it probably only felt that way because everyone was concentrated in the Visitor Center in the morning waiting for the cave to open up.  I had plenty of space and solitude once I started my trip down into the cavern.

It was sunny for the two days I spent in the Carlsbad Caverns area with a few clouds. The temperature was bearable, but I don’t remember the exact temperature. The cavern maintains a temperature around 56 degrees F so it’s a good idea to bring a light jacket.

I stayed at the Rodeway Inn, which is just outside the park entrance in White’s City, NM. It wasn’t the fanciest hotel, but the room was huge and I had a comfortable stay.

For the most part, I ate groceries I had picked up before leaving El Paso. The Rodeway Inn has some food available at the front office, including pizzas and other concession type items. There are also some restaurants in White’s City.

I visited Carlsbad Caverns as part of a seven-day trip around West Texas and Southern New Mexico. I split two days of this trip between Carlsbad Caverns and Guadalupe Mountains National Park. The two parks are an easy 35 miles apart.  Of the two, Carlsbad was definitely the one I was most interested in visiting though I hadn’t done much preparation beyond looking at some photos of the caverns.

I didn’t actually make it into the park on my first day. I flew from Austin to El Paso, rented a car, bought some groceries, and drove to White’s City. I made a brief stop in Guadalupe Mountains and by the time I checked into the hotel it was nearly sunset so I got my gear sorted out for the next day.

I wasted my first morning in the area by sleeping in.  The night before I had tried to Google good sunrise spots in the area and none immediately popped out so I just relaxed instead.  Once I got rolling, I headed into Carlsbad Caverns National Park and went to the Visitor Center. I purchased my ticket for the King’s Palace Tour and explored the area immediately surrounding the Visitor Center, including the Amphitheater and the, then closed, Natural Entrance.  Though that exploration, I found out about the Bat Flight Program and decided that that is where I’d spend sunset.

I left the park around noon and after some lunch drove down to Guadalupe Mountains National Park. I spent the afternoon there hiking the Devil’s Hall Trail. I made it back to my hotel by 5 p.m., had dinner and then went back to the Carlsbad Caverns Amphitheater to see some bats.

The ranger who introduced the program before the bat flight said that we could expect to see 400,000+ bats. The Amphitheater was about half full by the time the first bats started to leave the cave.   They continued to flow out of the cave for nearly 45 minutes; a constant swirling stream of bats.  It was amazing to watch because I have never seen that many living things in one place before. I have attended large rallies in Washington, DC, but even those topped out around 240,000.   By the time the flow had slowed to a trickle, only a few people were left in the Amphitheater.

On my drive back to the hotel, I took along Walnut Canyon Desert Drive hoping I would see a decent spot to spend sunrise. It was after sunset and getting dark quickly so, in retrospect, the odds were stacked against me finding a photo spot.  The drive is a narrow, one-way dirt road. And it is much longer than I expected. It was completely dark by the time I made it back to the main park road for the short drive to the hotel. Needless to say, I didn’t find what I was looking for.

Once again, I skipped sunrise due to lack of inspiration. I made it to the Visitor Center around 7:45 a.m. They open up at 8:00 and the cave entrance opens at 8:30.  I wanted to be one of the first into the cave. It turned out that wasn’t really a big deal because once I stopped for my first photo, people passed me anyways and after about 20 minutes everyone was spread so far apart it didn’t matter.

An odd coincidence of my time there was that the elevator into the caverns had been out-of-service for nearly 6 months but reopened the morning that I was heading into the cave. This meant that (1) fewer people hiked the Natural Entrance Trail and (2) there were more people in the actual caverns than there might have been if they’d had to walk a mile and a quarter to get down there. So that was a mixed bag of news. I had read about the elevator being out so had planned to hike in and back out anyways and that is what I did. 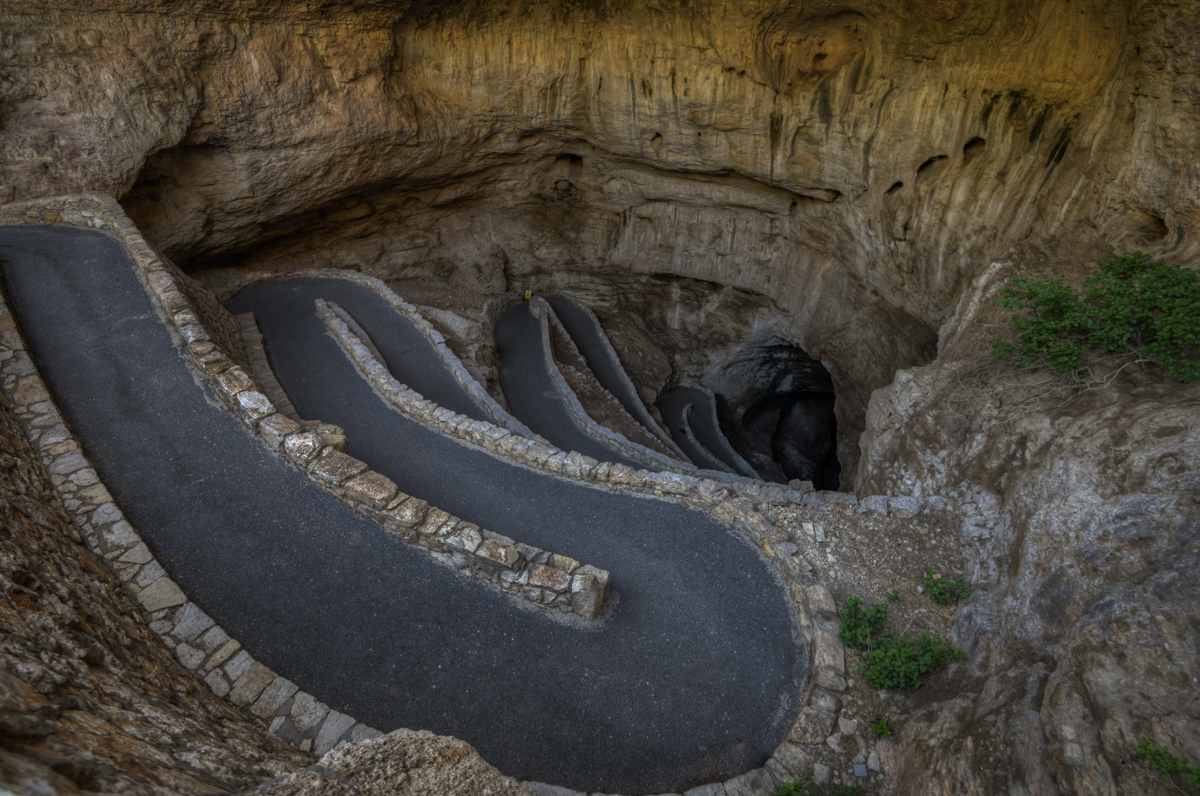 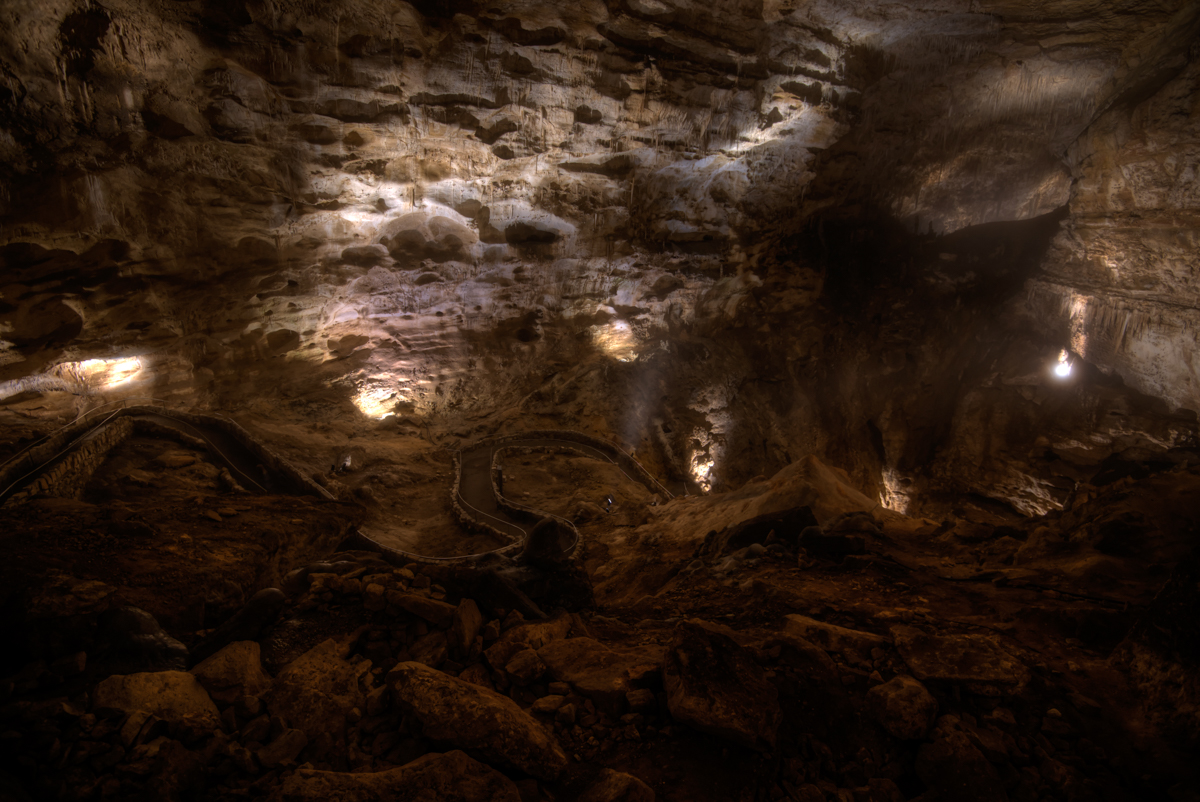 Scenes from the Natural Entrance Trail

The National Park Service estimates that the 1.25 mile Natural Entrance Trail should take about an hour to complete.  I took a bit more than that with occasional stops for photos.  That put me down in the main area of the caverns, where the elevators are, around 9:45.  The King’s Palace Tour started about 15 minutes later. That gave me enough time to drink some water, pack up my tripod and  get to the tour start location.  The tour itself takes about 1.5 hours. You can’t use a tripod so it’s difficult to get high quality photos, but it is a great side quest to learn about the formation of the caverns and their history.

Once the tour was complete, I ate a couple granola bars for lunch and then headed out for a 1.25 mile hike around the Big Room [See Map]. This was my favorite part of the caves. It is self-guided so you can take as much or as little time as you’d like at various places. You are allowed to use a tripod (at least that was true in 2016, check at the Visitor Center before lugging your tripod down). Most importantly is that the Big Room is a spectacularly large, open underground space. It has the feel of a football stadium; one with gigantic stalactites and stalagmites anyways.  I spent about 2 hours walking around the Big Room, frequently stopping for photos. 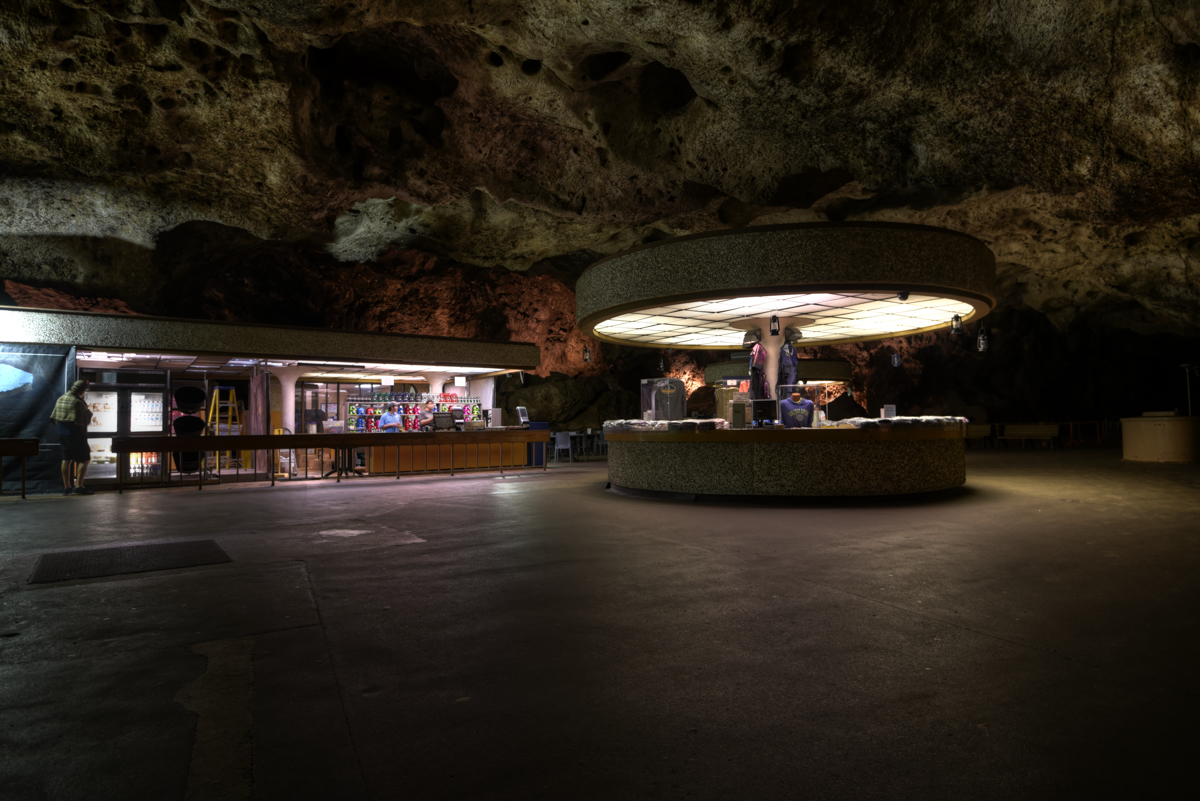 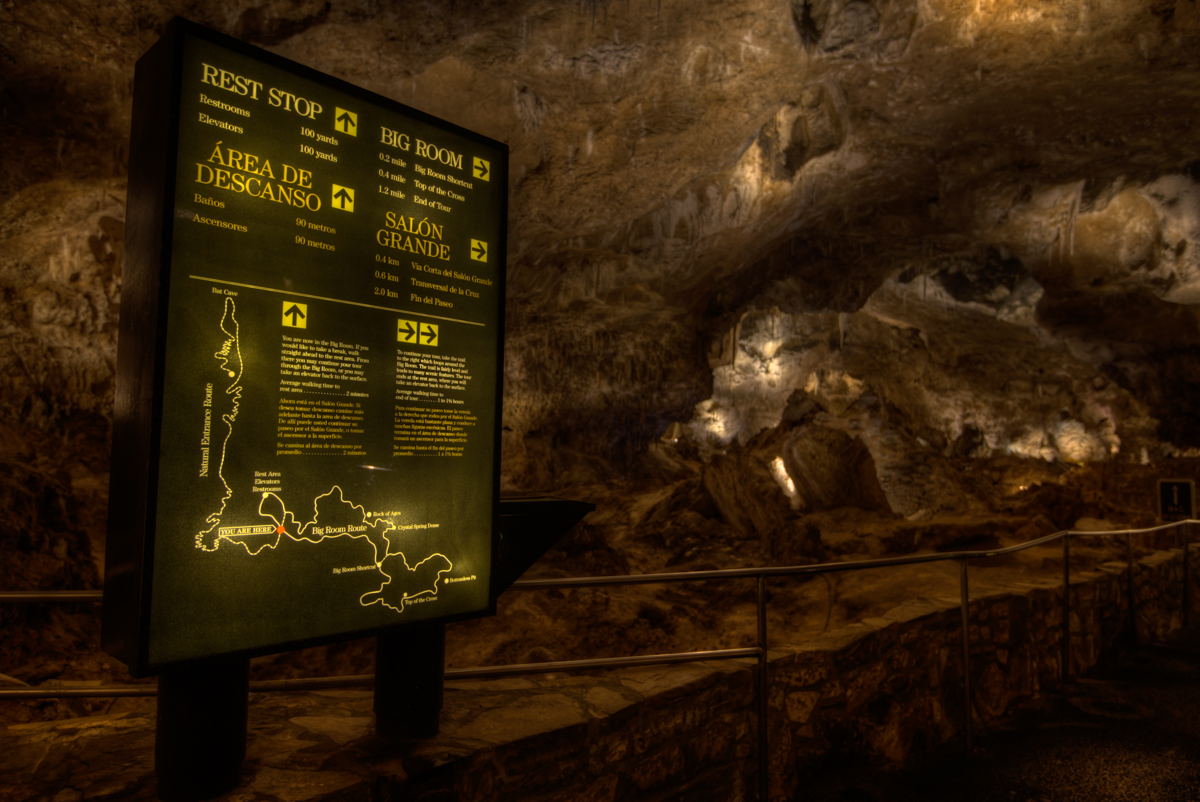 Scenes from the Big Room, near the elevators

After a short rest, I started to walk out. I wasn’t going to take the elevator despite the 750 ft of elevation gain between the cavern and the Natural Entrance. I am very glad that I chose to hike back out because on the way down I wasn’t looking back over my shoulder so didn’t see the amazing photo opportunities behind me. I stopped more for photos on the way back up than on the way down. It took me almost 2 hours to get back out of the caverns.  On this leg of the trip, I managed to get my favorite photo from the caverns.

I would definitely research the above ground trails more closely and work on photographing the surface more.  I would have liked to go on more of the ranger-guided tours as well. When I went, the King’s Palace Tour was the only one being offered because of the elevator situation and because it was the off-season prior to Labor Day.  I would definitely plan a future trip around when more tours are available.

There aren’t any specific photos that I thought about before going, but I knew I wanted a photo that demonstrated the amazing volume of the caverns. So I did think a lot about how I might include myself in photos in order to provide a sense of scale. As always, I would love to have pretty much anyone else in the photos, but the model needs to be cooperative and stand perfectly still for 5+ seconds while the shutter is open. 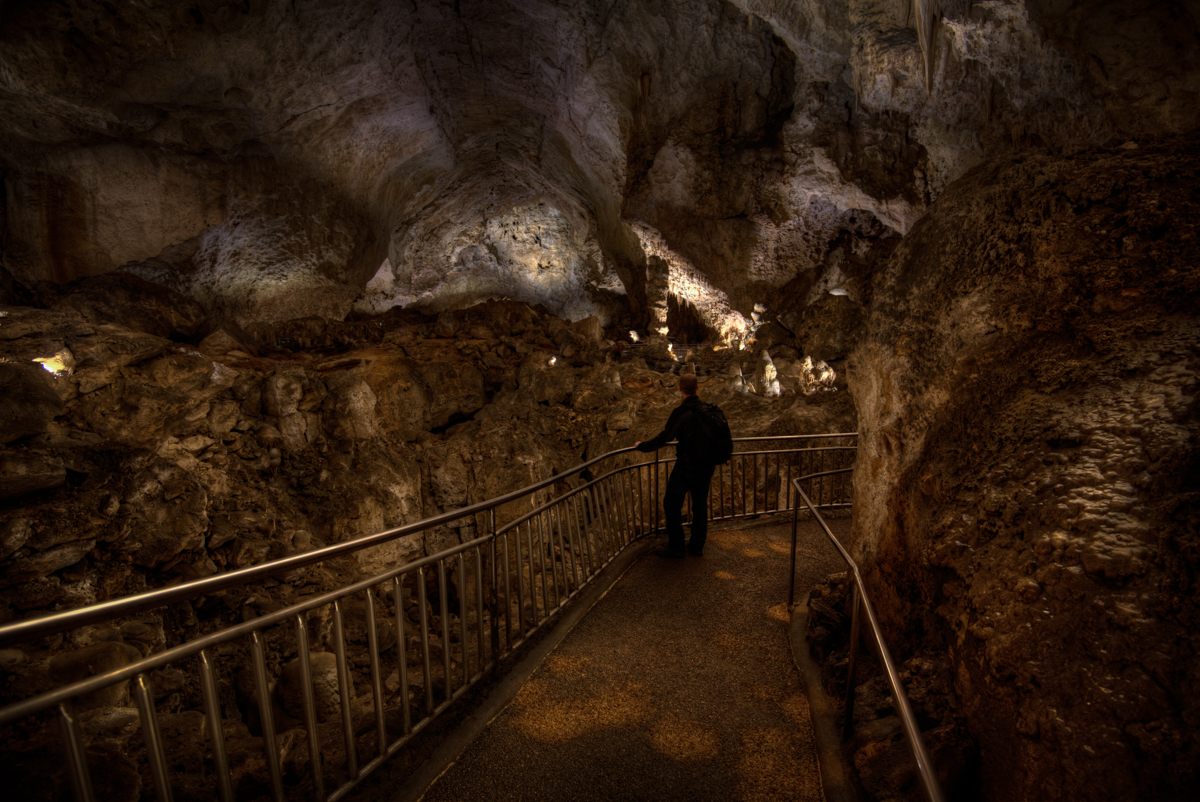 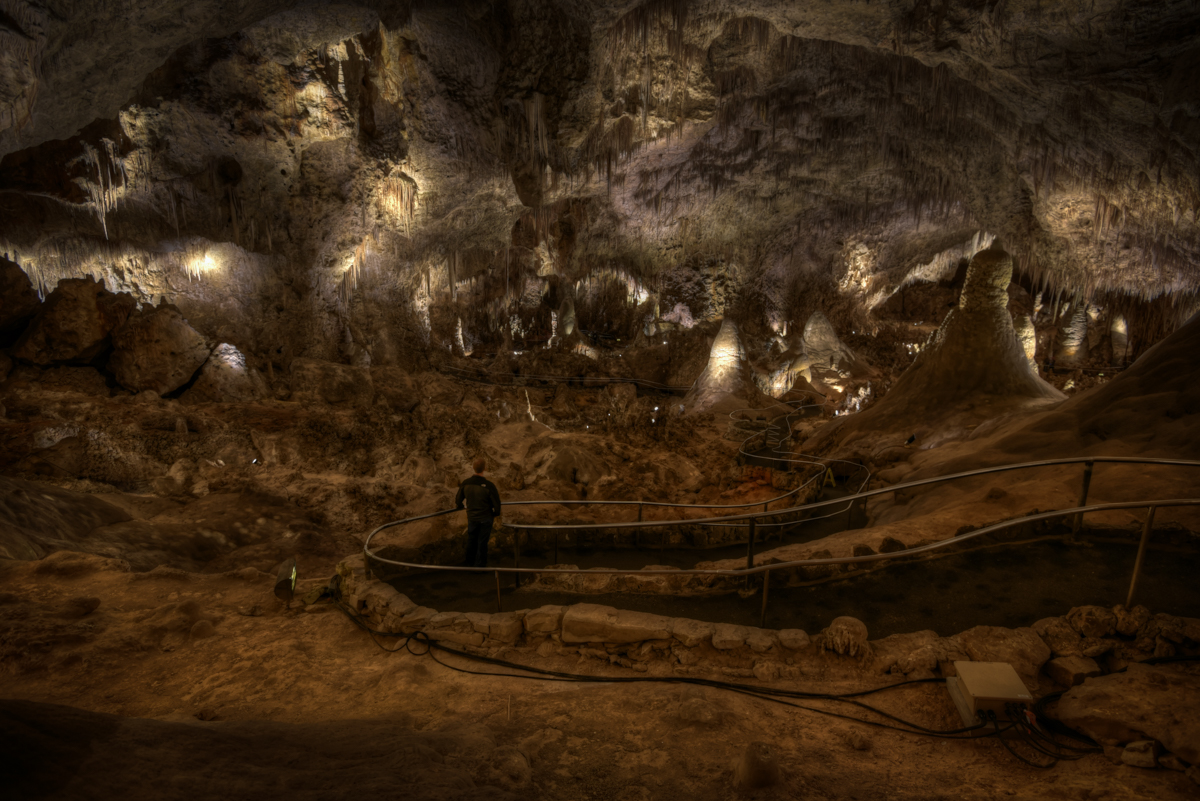 Perspective shots at various locations in the Big Room