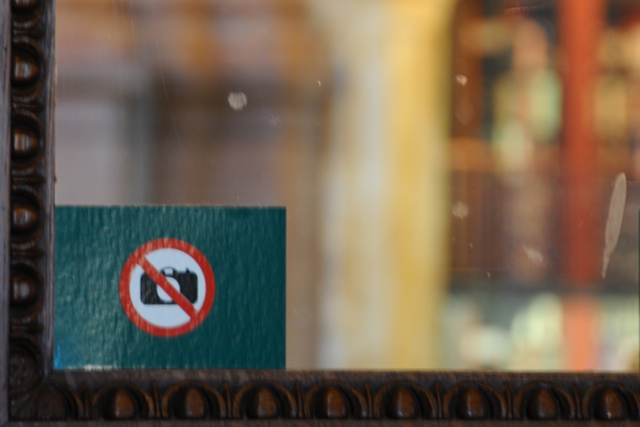 I get embarrassed when I’m “corrected” by a security guard about having a tripod where it’s not allowed. It’s also disappointing to realize that I won’t get a photo that I’ve imagined (at least where a tripod is necessary).  That’s one reason why I started this blog; to save you that hassle.  In each of the blog articles I try to outline the random patchwork of tripod restriction areas across the many sights in DC.

With this post, I want to take that one step further and tell you where you’re not allowed to take pictures at all.  Nobody really talks about where photography is not allowed. Hopefully this post can help you avoid run-ins with security guards and the disappointment of pre-planning a photo that just won’t happen.

Washington, DC tries (and sometimes fails) to properly balance security with public interest.  Any place that attracts visitors is going to attract cameras; SLRs, point-and-shoot, cell phones, etc.  Figuring out where to draw that line can seem arbitrary and burdensome to photographers.  Nowhere does this balance tip more toward the security side than the seats of power;  the Capitol, the Supreme Court; and the Pentagon.

The House and Senate Chambers – On the regular tour of the Capitol building that you arrange through the Capitol website or through your Congressperson photography is allowed, even encouraged. If you want to see a session of the House or Senate however, you’ll have to check your camera with the Sergeant at Arms’ Staff at either the House or Senate Gallery Staging Areas (<– this is a correction, thanks to a vigilant reader).  You can get floor passes to sit in on a Congressional Session by visiting the office of your Senator or Representative.

The Supreme Court Chambers – Again, photography is allowed throughout the building, just not in the courtroom.  Visiting the courtroom is filled on a first-come, first-served basis by standing in line during times when the court is in session.  You can either sit in for the whole time or walk through as the justices are hearing arguments.  No photography please!

The Pentagon – Given its recent history and the generally secretive nature of national security it probably isn’t surprising that photography isn’t allowed around the Pentagon.  As soon as you come out of the Pentagon Metro Station you’ll see “No Photography” signs everywhere.  It’s also probably no surprise that you can’t take pictures while on tours of the interior of the building.  Exception: The Pentagon 9/11 Memorial.   Photography is allowed in this narrowly defined area.

In General – As a general rule you should avoid taking pictures of security checkpoints, bag screeners, or individual security guards.  This will definitely raise some red flags for security who are told to be vigilant for those gathering intelligence for a future attack.

For Peace and Quiet

There are some places where photography is banned, not so much for security, but for the protection of artwork and for the sanity of people who want to enjoy a place without mirrors clicking, shutters closing, cameras beeping, or flashes popping.

National Archives Rotunda – Like many places that house artwork and fine print work, I’m willing to bet that this was meant as a ban on flash photography to protect documents that are sensitive to light, but they soon realized that people don’t know how to turn off the flash on their cameras so expanded it to complete abstinence. You can bring your camera in but you’ll have to stow it while walking through the rotunda.

In General – You should also avoid flash photography in any building that has artwork (painted or photographed; not sculptures) or documentation out of respect for the artist/author and for the people who would like to see a non-faded version of it 100 or 200 years from now. There will often be signage that specifically state “Flash Photography Prohibited.”

A Public Service Announcement – Don’t Be a Dick to Security

Also, please, please, please don’t get into altercations with security who ask you what you’re doing or ask you to move along.  At least once a month I’ll read an article about a photographer who gets hassled by security.  Most often these stories take place in the Metro or near public transportation hubs like Union Station or Reagan National Airport.

All of these stories go the exact same way.  A security guard or police officer asks a photographer what they’re doing.  The photographer explains. The guard doesn’t understand and asks further questions or asks the person to go elsewhere. The photographer attempts to demonstrate their intellectual superiority by quoting something about photography in public places that they read on the Internet.  The guard gets upset that they’re being corrected and/or talked down to by the photographer and the situation escalates into something more than it has to.

Explain what you’re doing to the guard and if he or she still asks you to go…just acknowledge that they have a tough job (picking out genuinely dangerous folks from hordes of innocuous ones) and go.  Maybe the guard does legitimately need further training about dealing with photographers but arguing with them isn’t going to change their mind.  Ask to speak to their supervisor if you’d like to address it.

I’ve only been stopped once. I was on the National Mall attempting to make a timelapse video of clouds passing over the Smithsonian Castle.  I had my camera on a tripod and I was looking up a lot, which I guess was pretty suspicious.  A Park Police officer drove up and asked me what I was doing, I explained, and he drove away.  He did pass by a couple more times in the half hour I was out there but everything went well.  Granted, I’m a nerdy, young-looking, white male so I probably don’t fit a lot of mental profiles that might make a behavior seem any more suspicious than it is.  The moral of the story is that it doesn’t have to turn into a thing.

Have Something to Add?

I want this page (and this site) to be a resource for people visiting DC with their camera as well as local photographers.  If you know any locations around DC I should add to this list let me know in the comments below or via my CONTACT FORM.

20 thoughts on “No Photography Allowed”