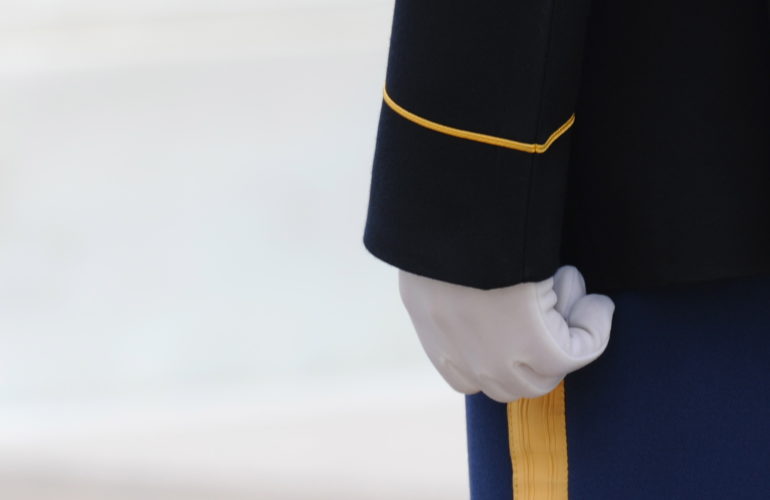 While many of the sites in Washington, DC convey a sense of awe, none bring forth the range of emotions that a trip to Arlington Cemetery does.  I oscillate between sadness and pride, between wonder and loneliness. The challenge of capturing these emotions in a photo is what makes Arlington Cemetery a must-see place for photographers.

When I first went to Arlington, I felt conflicted about taking photographs there.  Like I said, it can spur some pretty strong emotions and you don’t want to feel like you’re exploiting someone’s loss for the sake of a great photograph. I quickly got over this as I realized that it is more than just a cemetery. For better or worse it’s a tourist attraction; it’s there for people to see and remember the sacrifices of our military. And so long as it’s treated with respect, there should be no conflict with trying to remember this sacrifice through photography.

Arlington Cemetery is open 365 days a year and is a great place to go year round. Like many cemeteries, the landscaping is diverse and immaculate.  In the Spring, when more than a million people flock to the Tidal Basin to see the cherry blossoms in bloom, you can find cherry blossoms sitting serenely, all but ignored, at Arlington. In the Fall, the cemetery is one of the best places to go to find Fall color. There is something poetic about the life and death cycles of these plants paired with the fields of headstones.  In December, thousands of wreaths are placed on the graves, leading to even more opportunities for great, unique photos.  At any time of year, you can find some place to photograph that’s all your own. The majority of people who visit come for two reasons, the eternal flame at JFK’s grave and the Changing of the Guard at the Tomb of the Unknowns. Anywhere outside of these two areas the number of visitors drops off dramatically. 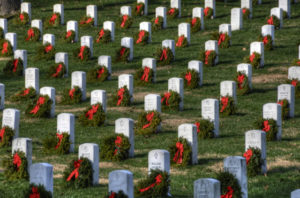 In almost every post, I recommend that you visit places around sunrise or sunset, when the light is ideal, so it is great to finally be able to give you some advice about what to do with the daylight hours.  Arlington is, for the most part, only open during daylight hours. The cemetery is open from 8 – 7 between April and September and from 8 – 5 between October and March. There are times of the year when these hours will overlap with sunrise or sunset but just barely.  You’re better off saving this as a daytime activity.  One recommendation I would make is to check out the cemetery late in the day and then exit through the North gate near the Netherlands Carillon to capture the most amazing view of Washington, DC as the sun sets (see View of the Big 3 on the map below). 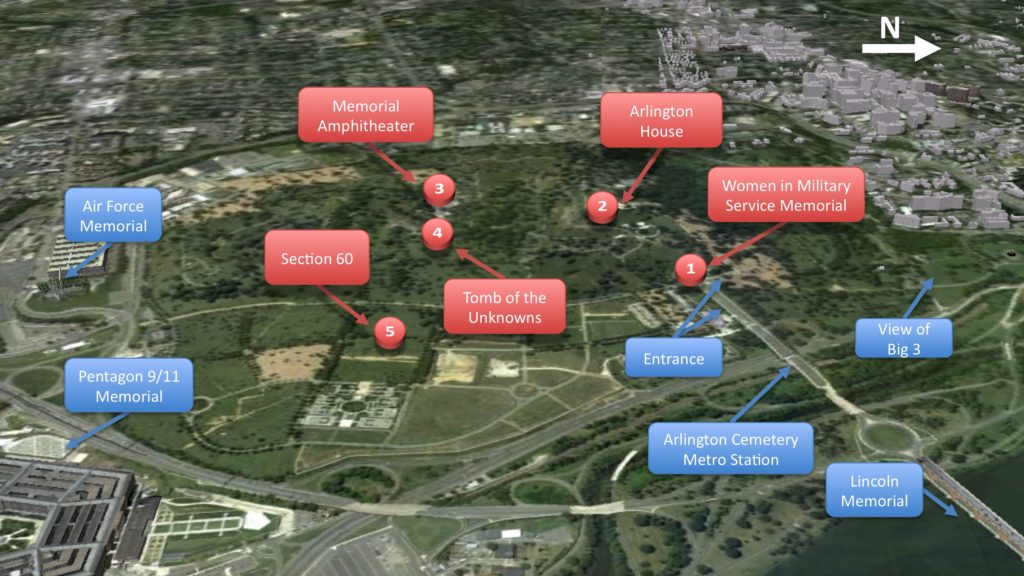 There is no shortage of great photographic opportunities at Arlington Cemetery.  The place is huge and diverse. There are older sections and newer sections. There is flat land and steep hills.  I’ve been to Arlington Cemetery several times now and find something new every time. 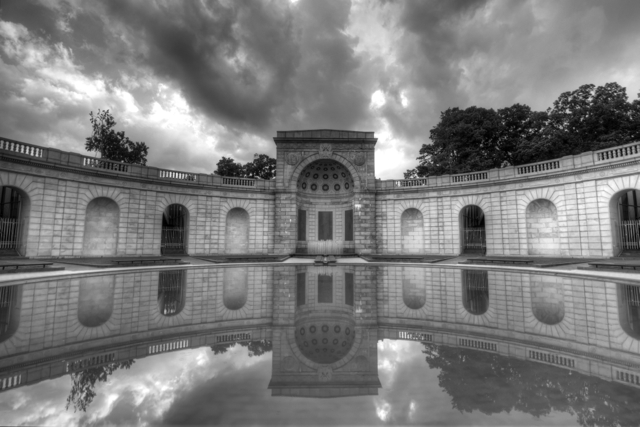 The first thing you’ll see as you approach the entrance to Arlington is the Women in Military Service Memorial (1); a giant stone semi-circle with a central reflecting pool. That Memorial is actually a museum that contains photos and other artifacts that memorialize the sacrifices of women in our military.  What attracted me to it was the fact that the central area of the wall looks remarkably similar to a portion of Buckeye Stadium at Ohio State (my alma mater).  Plus, I am a sucker for reflections and the pool is so still that you can get perfect reflections. 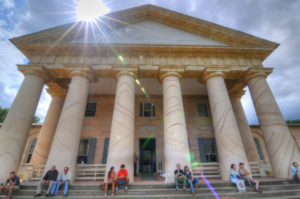 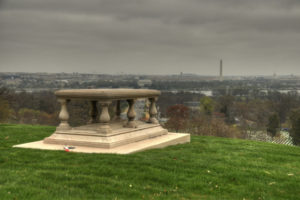 From most of the Western side of Washington, DC you can look to the East and see a house on a hill.  This is Arlington House (2). It used to be Robert E. Lee’s house and it has an amazing view of the city.  The house itself is difficult to photograph since it’s large and sits right on the edge of a hill. You can’t back up far enough to get it all in, unless you have a wide-angle lens.  It is still well worth the walk up the steep hill because of the view and because of the unique gravesite of Pierre L’Enfant, the architect of DC.

-Tomb of the Unknowns- 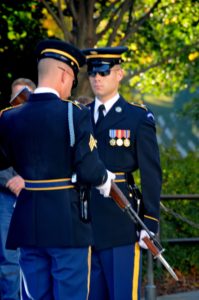 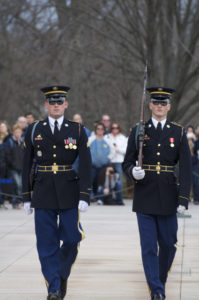 The Tomb of the Unknowns (4) (AKA Tomb of the Unknown Soldier) is the central attraction of cemetery.  Many people who visit head straight to the Tomb and then straight back out.  The main event here is the changing of the guard ceremony.  It happens every hour, on the hour (when the weather is nice) and every half hour during the heat of Summer and the cold of Winter.  One thing you’ll notice here, is how eerily silent the large crowds are.  Occasionally, they’ll be chastised by the guard but for the most part it’s silent. You’ll be hyper-aware of the sound your SLR makes as the mirror flips up and occasionally you’ll get dirty looks.  I wanted to make a timelapse video of the change ceremony but after a few clicks of the mirror I became self-conscious and stopped.

As you stand on the steps and look at the tomb, the change over ceremony (i.e., the inspection of the incoming and outgoing guards by the sergeant of the guard) takes place to the right-hand side.  You’ll even be able to see the well-worn areas where the ceremony is performed over and over again.  This is where you’ll want to stand to get the best photos.

While the Tomb of the Unknowns may be what people think of when they think about the cemetery, they often forget that it is, in fact, a cemetery.  There is a sea of gravestones. I haven’t seen anything like it, aside from other military cemeteries I’ve visited.  The cemetery is arranged into sections mainly demarcated by roads.  Of all of the sections in the cemetery, I prefer to photograph in Section 60 (5). The older sections of the cemetery are a lot like you would see in any other cemetery, with a diverse arrangement of headstones. I don’t like that. Soldiers with wealthy families, or of higher rank, have huge obelisks or mid-size memorials built in their honor, while less well-to-do soldiers have the standard headstones. Section 60 is one of the newer sections.  It is where most of the casualties of the recent wars in Iraq and Afghanistan, that are in the cemetery, are buried.  In Section 60, a colonel’s grave looks the same as a private’s.  Also, in the newer sections the graves are arranged in straight rows that form geometric patterns when viewed from different angles.  That uniformity, simplicity, and orderliness says military to me.

There are other locations you will likely want to visit in Arlington Cemetery, but I don’t consider them photogenic.  I want to make you aware of them because you might disagree.  To find out where they are at you can consult a map of Arlington Cemetery.

Lens: Bring a lens (or several lenses) that handles a wide range of focal lengths (18-135mm for DX cameras; 27-200mm for FX).  You won’t have any trouble switching lenses so you can bring whatever you feel comfortable carrying.  With the exception of Arlington House I can’t think of any reason why you’d need/want a wide-angle lens. You may, however, want to bring a super-telephoto lens (>200mm) to capture detail in photos at the Tomb of the Unknowns.

Tripod: You won’t need your tripod here.  Since the cemetery is open only during the daylight hours there will should be enough light to not have to worry about sharpness.  That said, there isn’t a rule against carrying one, and I’ve been told they are allowed at the Tomb of the Unknowns (if you need help stabilizing your telephoto lens) so long as you don’t create a tripping hazard or cause yourself to become a focal point.  The only time I’ve ever used a tripod at Arlington is when making the timelapse video.  I used a Gorillapod and took special care to make sure I was not setting it directly on a grave.

Flash: I’ve used an external, hot-shoe flash at Arlington before; mainly as a fill flash for lighting up Fall leaves and cherry blossoms. I would avoid using it at the Tomb of the Unknowns so you don’t draw unnecessary attention to yourself.

Filters: You might find a circular polarizer helpful for cutting through haze when taking photos over long distances.  Also, there is a lot of green in grass and trees that would benefit from the saturating effect of a polarizer.

Bag: Any size bag is fine.  You don’t go through any security when entering the cemetery and none of the guards or other workers will give you a hard time.  Bring a big enough bag to pack what you’ll need for your day of photography. I usually wear my large photo backpack because I’m on my way from  or to somewhere that I’ll be using my tripod and other equipment.