When I visited Washington, DC for the first time two years ago, I dropped my bags off at the hotel and immediately started walking toward the White House.  After years of watching The West Wing and following Presidential politics, it is the place I felt the gravity of the city pulling me.  I didn’t come for photography that time, I was in DC for an interview, but I returned with my camera in hand a few months later once I moved to town.

That first time I came to take photos of The White House, I was a little disappointed. The White House is one of the most restrictive photo locales in DC and your photo opportunities are limited by fencing and landscaping.  At the U.S. Capitol Building, you have 360 degrees to walk around the building and find angles you like.  At the White House, you have 100 degrees, at best.  Over subsequent trips, I’ve managed to get photos I’m happy with.  I’ll share some of what I’ve learned below.

If you’re interested in scheduling a tour you can do that through your Senator or Representative’s office.  You can also take a virtual tour of the interior through the Google Art Project.

The area around the White House, outside of the fencing, is open every day of the year. There are occasionally restrictions when special events are happening (e.g., state dinners, Marine 1 landings and takeoffs, etc.) but those are rare and usually don’t last long so you don’t have to worry about missing an opportunity for a few pictures.   You can check the White House schedule for events that may restrict your access. Photographic opportunities at the White House do not vary much over the course of the year. For the most part, the picture you get in the Spring will look similar to the one you take in the Fall. The flowers and the leaves change with the seasons but given the restrictions on angles for photos, there aren’t great opportunities to take advantage of those color differences. 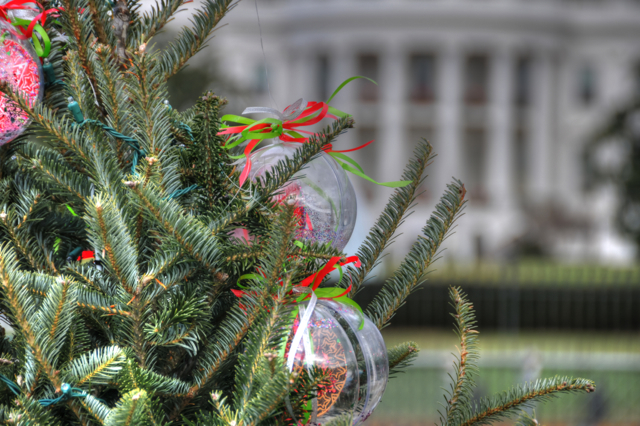 During the Christmas season, wreaths are hung from the balconies and some of the National Christmas Tree related decorations can be included in your photos.  For certain occasions, the White House will be splashed in colored lighting.  In October, for example, the White House is lit up with pink light to raise awareness for breast cancer.

I’ve gotten some decent pictures of the White House at sunrise and sunset; however restrictions on tripods can make it difficult to get sharp photos in low light conditions (I usually try to brace the camera against the fence at these times). Crowds, which can be considerable around the White House, are not really a factor in deciding when to go.  Once you get up to the fence, there won’t be a problem with people getting in between you and the White House. The area around the White House is a gathering place for some of the more eccentric and interesting people in Washington, DC, but they often don’t appear until later in the day.  With these considerations in mind, I recommend visiting the White House during the daytime; preferably when it is cloudy to help even out the light.

The North side of the White House along Pennsylvania Avenue is the view you’re probably most used to seeing on TV or on the news.  I’ve gotten my favorite pictures of the White House from this side.  There are a couple different options for photos here.

First are those taken through the fence.  I prefer this approach, as opposed to photos from further back, because I like to maintain the illusion of there not being a fence or that I am important enough to be inside of it.  The bars of the wrought iron fence are not evenly spaced. The trick for SLR users is finding bars that are far enough apart to fit your camera lens through.  I have found gaps wide enough for my 18-200mm Nikkor lens and my 11-16mm Tokina (which is much wider) but have had to remove the lens hood once or twice.  You just have to look around a bit. My favorite angle is straight on (as in the picture below).  At that point in the fence (1) there is a design fashioned in the iron. That design opens up enough space to easily fit a lens through. 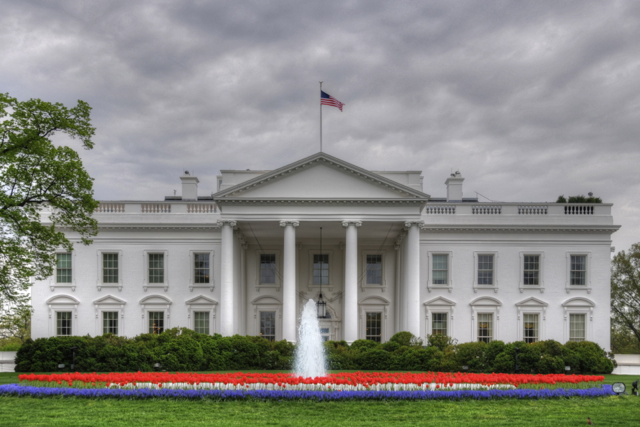 You can also take a photo at an angle, though this makes finding a sufficient gap in the bars even more important. I like the 45-degree angle of the photo below (2), which includes the fountain and some of the North Lawn.  The complement of this photo (i.e., one taken from 45 degrees the other direction) will put you behind trees. 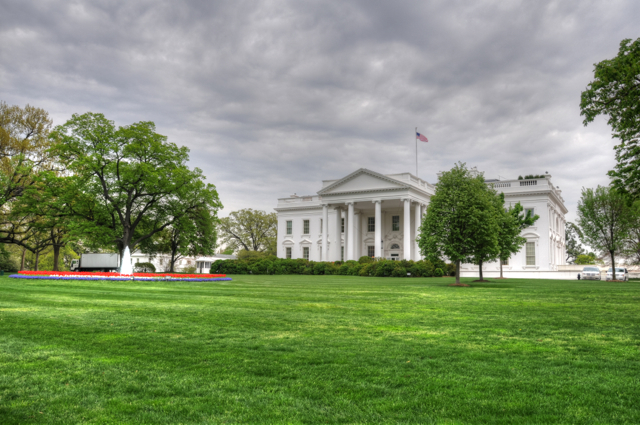 Photos taken from further back, either on the closed off section of Pennsylvania Ave. or from Lafayette Park (3) can also be interesting.  As I mentioned earlier, this is a gathering place for an interesting cast of characters and occasionally medium-size protests. Lafayette Park is a great location for seasonal flowers, particularly for tulips in the springtime.  Protestors and flowers both make for interesting foreground elements in photos of the White House. 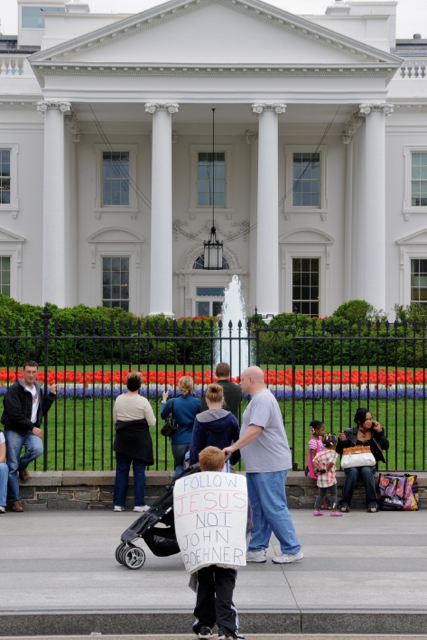 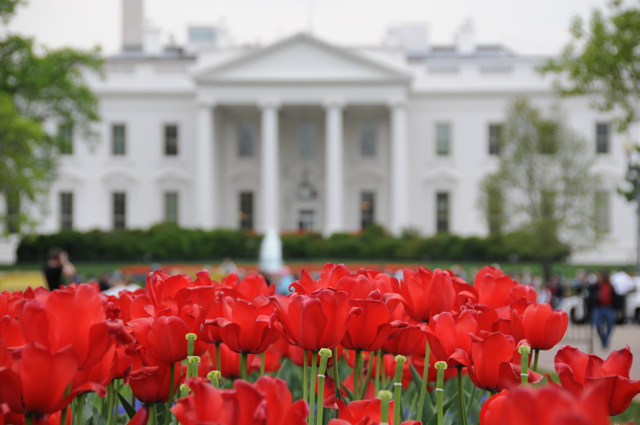 On the South side of the White House the trees that line the South lawn form a funnel that narrows the angle of view, so your choices here are limited.  There are two walkways that line E Street (4) and there is very little room to maneuver on either of them.  At busy times it can be a bit claustrophobic.  But the view is worth it.  From this angle you are several hundred feet away from the White House so having a zoom lens will help you find the composition you want.  From the walkway on the North side of the road, you can again take photos through the fence.  On the South side of the road, you can include people to give the photo a sense of scale. 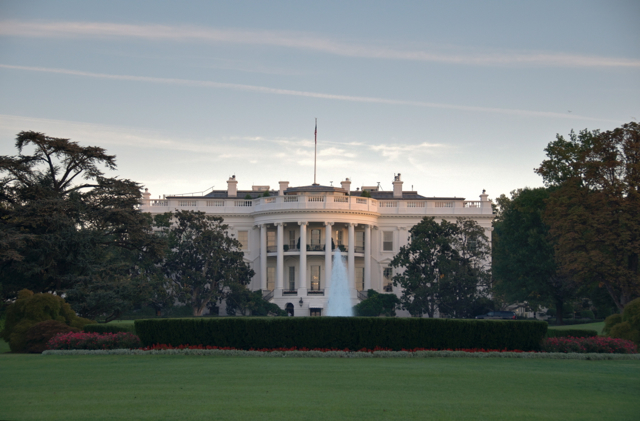 When it is not undergoing turf restoration and is open to the public, the Ellipse (5) offers a less claustrophobic position to take photos from.  It is further away so you’ll need a more substantial zoom lens to frame your photo.  The Ellipse is also the best place to photograph Marine 1. 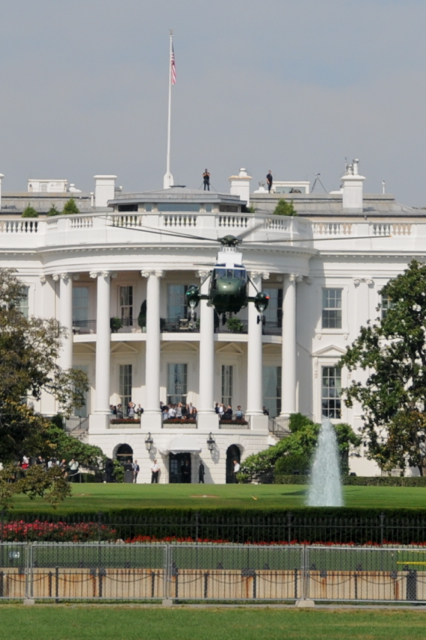 A less common photo location for the White House is across Constitution Ave. near the base of the Washington Monument (6).  From there you have a slightly elevated position so you don’t have to include the fence.  Also, you can use a tripod here, so it’s possible to use a much longer focal length and to take photos at night.

For those who can make travel plans at the drop of a hat (I am not one of them) or those who live in a reasonable driving distance of DC, the White House offers some other interesting photographic opportunities. I write in more detail about these events elsewhere on the blog but I wanted to make you aware of them here. First, the White House offers Spring and Fall Garden Tours, during which you can view (up close) the well-maintained landscaping on the South Side of the White House.  These events usually take place on weekends in April and September, but the exact weekend isn’t announced until about a week ahead of time.  Second, the lighting of the National Christmas Tree doesn’t get you any closer to the White House but it is an interesting event. The only problem here is that you have to win (free) tickets through a lottery.  One of my favorite events is seeing Marine 1 land and take off. Knowing when to be there to capture this is tough but not impossible. Finally, the White House has been reaching out to the public via social media. I have had the good fortune to attend events at the White House via drawings announced on Twitter and Google+. These have offered opportunities to photograph the White House that I likely wouldn’t have gotten any other way. 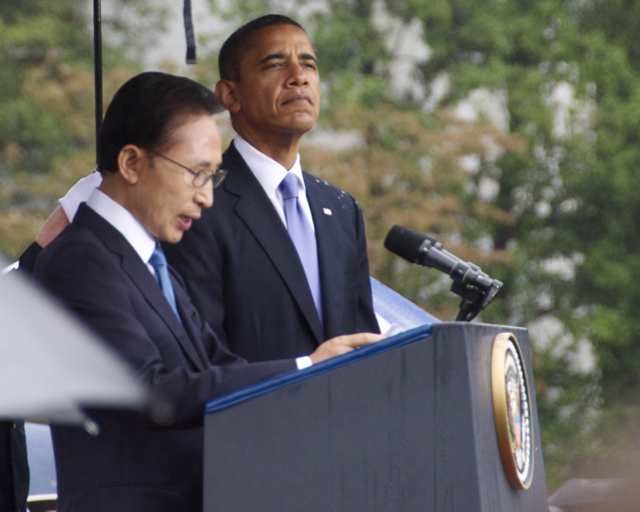 Lens: A standard zoom lens (DX: 18-135mm, FX: 27-200mm) is sufficient for capturing most photos around the White House.  On the North side, where you are closer, 18mm (for DX cameras) is wide enough to capture the façade of the building as well as the sky behind it.  On the South side, you will want the ability to zoom in a bit.

Tripod: If you’re going out just to photograph the White House, I recommend leaving the tripod behind. Tripod use is restricted in most of the area around the White House. They are not allowed along Pennsylvania Ave., in Lafayette Park, on the South side pedestrian walkways, and on the Ellipse.  Tripods are allowed, however, on the South side of Constitution Ave. near the Washington Monument.  If you have a long telephoto lens (200-300mm) you can get some good, tripod assisted photos from there.

Flash:  If you aren’t planning on taking a lot of portrait-type shots, I recommend saving the space and weight and leaving the flash at home (or in your hotel room). A hot-shoe flash may help with fill lighting if you are taking pictures of friends or family, but will do you little good otherwise. The fences keep you back far enough and the White House is large enough, that the flash won’t be helpful for light. You’re better off dealing with natural light.

Filters: You may find a circular polarizing filter helpful, especially during the day, for capturing deeper blues in the sky, darker greens in the grass and other landscaping, as well as limiting reflections from the White House (it is white after all).

Bag: There are no bag restrictions for the area around the White House.  Given what I’ve recommended as far as equipment to bring, a small-shoulder bag should be sufficient.

9 thoughts on “Photographing The White House”