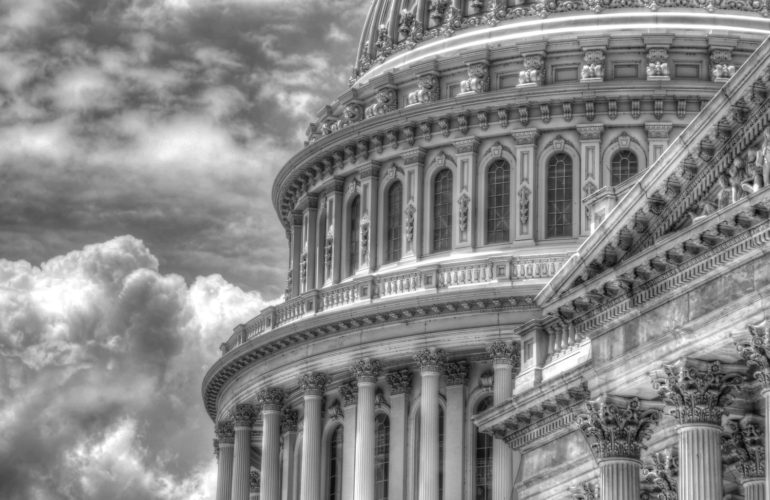 To many, the United States Capitol Building is a symbol of dysfunction and partisanship, but I think the opposite.  It is a place where, out of the chaos and disorder of 2 contentious political parties, 50 states, and 300 million citizens, America comes together to create a national identity.  I’ve lived in North Dakota, Ohio, and now Maryland in my lifetime and I consider myself a North Dakotan and, to a lesser extent, an Ohioan and Marylander.  But all of these state identities are subordinate to my feeling as an American and many of the common ideals, values, and commitments that make us American have their roots in Washington, DC; specifically in the Capitol.  Carved into the statue of Freedom that sits atop the Capitol is the motto E Pluribus Unum, or “Out of Many, One.”

Forgive me for digression but I think that the prior paragraph illustrates why the Capitol Building is my favorite photo location in Washington, DC.  I appreciate symbolism and I think the amazing structure we (i.e., Americans) built, standing 751 feet wide and 288 feet tall, is a more-than-adequate monument to democracy and to the American identity.  Of course it doesn’t hurt that the Capitol is three blocks from where I work.  At least twice a week, I will take my camera out on my lunch break and walk around the Capitol to see if there are new angles I hadn’t thought of before or any interesting events going on.  I have more photos of the Capitol than any other place in DC and I went through a lot of trial and error to get them.  I’ll share some of those lessons with you below.

This is hard to answer. I’ve gotten great photos at all times of day and all times of year.  Here are a couple things to bear in mind when deciding:

Tourism in DC peaks in the Spring and bottoms out in the Winter and this is for good reason.  In late March and early April there are dozens of blooming cherry trees around the Capitol whereas, in the winter there are fewer people but the fountains are drained, the grass turns brown, and those in charge take advantage of the reduced numbers of people to start construction projects.  So if you’re adamant about minimizing the number of people in your pictures come at the times other people don’t want to.  If you don’t mind crowds, the Spring or the Fall make for the best combination of scenery and temperature.

I prefer sunset and night photos to sunrise ones because you can get three very different feeling photos during the same outing (i.e., sunset, twilight, and night).  You can take night, twilight, sunrise photos in the morning but you have to get up brutally early and the Metro isn’t running so you have to drive and, even worse, find a place to park (FYI, DC police give out about 1.6 million parking tickets per year).  On other hand, in the morning you won’t have many people wandering into your photos outside of a few joggers.  If you’re a more brave parker than I or if you’re in a hotel near the Mall, mornings are worth a try.

–Include the Dome in Your Photos-

I’ve taken hundreds of pictures around the Capitol and every great (or even good) photo that I’ve taken includes the dome as an important element.  While the whole Capitol is an amazing structure, it’s the dome that people will recognize and the dome that will give your photo a sense of place.  Your challenge as a photographer is finding an interesting background or foreground.

Sunrise and sunset make natural backdrops for the Capitol. I like to shoot into the light and use High Dynamic Range (HDR) photography.  That means I photograph the sunrise from the West side of the Capitol and sunset on the East side. 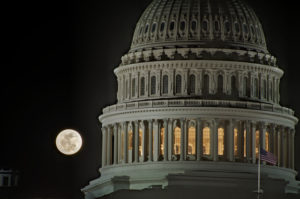 The full moon rising behind the Capitol dome is a difficult photo to get but one you can plan ahead for.  You can use a tool like The Photographer’s Ephemeris to find the date, time, and angle the moon will rise during your trip.  If your dates are flexible you can come in March or September when the moon rises directly behind the Capitol, in which case you can set up on the West side of the Capitol near the Capitol Reflecting Pool or further down the National Mall depending on how long of a lens you have.  You can come in December or January when the moon rises to the Northeast of the Capitol and great angles can be found down Maryland Ave or during June or July when you can set up along Pennsylvania Ave. 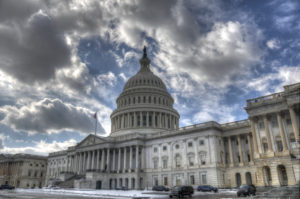 “Perfect” clouds are tough to come by in Washington, but when they do come out you can take great, dramatic photos at any time of the day.  You don’t have to get up early or wait on the sunset.  Keep an eye on the weather and if you are lucky enough to be visiting when there are clouds like those in the picture take advantage of them.   Before you head out you can get a preview of what the conditions are like by checking out this webcam on the Senate’s website.

1. Reflections make a great foreground element of any photo and I try to include them whenever possible.  As the name suggests, the Capitol Reflecting Pool is a great spot for this type of picture.  The Reflecting Pool is big enough that it’s affected by the wind.  On windy days, and there are plenty in DC the water will be choppy obscuring any chance at a comprehensible reflection.  On the East side of the Capitol there are two water features that surround skylights for the Capitol Visitor’s Center.  These are my favorite places to take reflection photos of the Capitol.  The water is drained in the winter but the marble is still sufficient to get a nice reflection.

2. There is a small, red-brick structure that sits on the Northwest side of the Capitol.  It houses a small fountain and you could easily walk by it without noticing it.  I love including this as a foreground element in photos because the warmth of the red brick structure contrasts with the cold white stone of the Capitol. 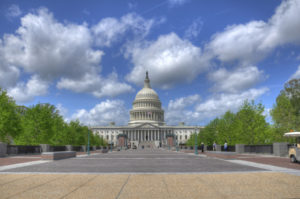 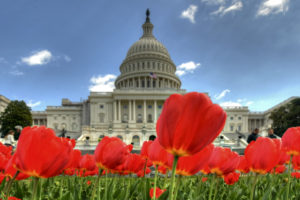 4. Seasonal Flowers surround the Capitol in all except the winter months.  Flowers have always been one of my favorite foreground elements.  They are everywhere so it makes it possible to connect several of your photos from around Washington, DC with a theme.  They also provide color to otherwise cold, grey buildings. 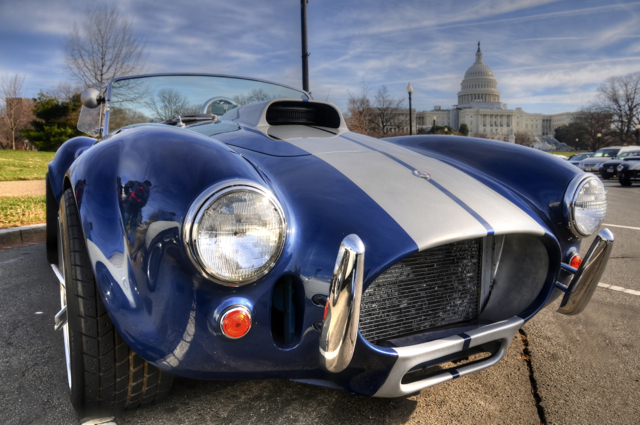 I have been giving you ideas for photos. You may want to take all or some of that advice, but don’t get so caught up in those things that you miss those opportunities that can make your pictures truly unique.  I’ve walked around the Capitol hundreds of times and occasionally I find interesting, non-recurring events.  You can’t plan for them but you have to be on the lookout and have the right equipment to take advantage of them.  Some opportunities might stick out like a sore thumb while others might be hiding in plain sight.  Again, I would suggest doing what you can to include the dome.

Lens:  My feeling has always been that you can never get a wide enough field of view at the Capitol.  Bring your widest angle lens.  Most of my pictures are taken between 11 and 30mm.  If you scoot to the far reaches of the plaza on the East side of the Capitol, an 18mm focal length on a DX camera (27mm on a Full Frame) is barely enough to squeeze in everything from the steps to the statue of Freedom.  Things are even more compressed on the West side.  You are going to have to be content using portrait orientation a lot or clipping pieces of the building.  Of course you don’t always want pictures of the whole building at once, but, trust me, you’ll find yourself frustrated when you try to get a reflection and a beautiful sunset together.

Tripod:  You can bring a tripod but watch where you use it.  Taking sunrise, sunset, nighttime, or HDR photos can be difficult without a tripod and that’s tricky around the Capitol.  Generally speaking, tripods are not allowed on the Capitol grounds, and that’s an extensive area (shown in red below).  I have rarely seen this rule enforced outside of the area immediately surrounding the Capitol, however.  The best place to set up a full-size tripod is the area surrounding the Capitol Reflecting Pool known as Union Square (shown in orange below).  Recently, however, the Architect of the Capitol took control of this area from the National Park Service and whether tripods will be allowed there is still up in the air. I spoke to a Capitol police officer and he said he was told NOT to enforce the tripod rule in Union Square.  But if you are told to pack up your tripod, know that they are now (theoretically, at least) banned from that area.  So there’s no need to debate with the officer. 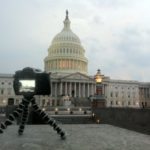 One alternative is to bring along a table-top tripod or a gorillapod.  I recommend this for many locations in DC that don’t allow tripods.  Generally there are security barriers that you can use to get the smaller tripods up to the right height.  The Capitol is no exception, there are pylons and security barriers all over the place, and I have never been hassled about setting up there.

Filters:  A circular polarizer can be helpful during the day to bring out blue colors in the sky and green in the grass, to reduce the haze that hangs over DC in the humid summer, and to cut down on glare from the building and dome.

Bag:  There aren’t any bag restrictions so you can go as big as you want.  However, if you plan to take a tour of the interior of the Capitol you can’t bring in a large backpack.

My Capitol Set on Flickr: I couldn’t include all of the pictures I’ve taken of the Capitol in this blog post.  If you are looking for additional inspiration, you can find the rest on Flickr.

Monumental Thoughts:  Rick is as knowledgeable about the sites around DC as anyone and offers interesting factoids on his blog.

DC Like a Local: A blog that gives you practical information you’d want to know as a visitor such as how to get to a place, some historical background, etc.  I’ve linked to an article specific to the Capitol.

AB Pan Photography: If you’re looking for a second opinion, or some other ideas, Angela is another local photographer.  She has some amazing photos of the Capitol, like the one I’ve linked to here.

Senate Webcam:  I like to check in on this cam before I go out on my walks at lunch.  It gives me a sense of what the sky over the Capitol is like and how hard the wind is blowing.

What:        The United States Capitol Building

When:        I prefer sunset and night but anytime is good

Filter:         Circular Polarizer during the day

21 thoughts on “Photographing the U.S. Capitol”